Summit of the Americas: a chance for dialogue?

The Fifth Summit of the Americas just started in Trinidad and Tobago with 34 leaders of the region attending. While most people’s attention is on US President Obama meeting the leaders of the region, there is actually the need to forward the agenda and make the conference theme Securing Our Citizens’ Future by Promoting Human Prosperity, Energy Security and Environmental Sustainability not being an empty promise. This is especially true, when looking at fundamental issues needed for the implementation of these promising goals, such as transparency, accountability and effective measures against corruption.

So far, the draft Declaration of Port-of-Spain does not go beyond any former promises. But Obama’s role can be key, showing leadership and a new consciousness for the need of cooperation on the key challenges facing the region, among them: Corruption.  Will leaders finally live up to their promises made in previous years? 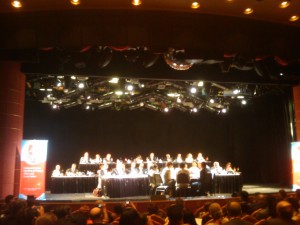 But first have a look at the starting day of the Summit, where the Ministers of Foreign Relations engage in a dialogue with civil society. The meeting is led by the minister of the host country and the Secretary General of the OAS José Miguel Insulza. It allowed civil society groups to share with the OAS member state governments in a direct and open dialogue the main challenges, conclusions and proposals, drawn during several deliberations that took place before the Summit. Transparency International had a chance to present today, together with other four civil society regional networks, some of the citizens main worries related to corruption and transparency.

Ximena Salazar, senior advisor for the Americas region and liaison officer with the OAS, expressed that limited advances have been made in the implementation of the Inter-American Convention Against Corruption (IACAC), a convention that was born as part of the Summit process more than 10 years ago.

Challenges mentioned by other civil society organisations included among others democracy, crime, trade, discrimination, and the problems coming with living in the most insecure region in the world.

In their comments and responses several ministers acknowledge the relevance of the corruption issue. In particular, the ministers of Uruguay, Paraguay, Jamaica and Belize, highlighted the priority transparency has gained in the hemisphere. Colombia also emphasised the importance and need for an adequate follow-up of the commitments made in the Summits.

Only more promises? Or will anti-corruption and transparency finally make it into actual policy?

Read more at Transparency International’s In Focus section (Spanish) and the press release.