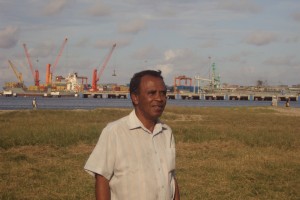 For the past three years I have led the Madagascar section of the Africa Education Watch programme that is assessing primary education in seven African countries, including Madagascar, where I am leading the team that is implementing the project.

This week, we published a regional overview report as part of a three-year programme looking at how schools are run and identified corruption-prone areas in the system.

This kind of work requires a detailed assessment and to reach the heart of the matter, my team filled in more than 1,300 questionnaires based on interviews with parents, head teachers, heads of Parents’ Associations, heads of Management School Committees and district education officers. The questionnaires were standardised and our staff sometimes collected stories that didn’t quite fit the format, but I think bring the data to life. I would like to retell a couple here. They show how corruption works in day-to-day life.

Madagascar, for those of you who don’t know, is the fourth largest island in the world. It is extremely beautiful but very poor. More than two-thirds of the 20 million people that inhabit the island live on less than US $2 a day and there is a high illiteracy rate, particularly among girls, which is why getting education right is so important.

Unfortunately, our education system is not as well administered as it should be (I refer you to the Madagascar report for details) and there are many areas that are prone to corruption. My first story shows how the weather becomes an opportunity for such behaviour.

Every year the coastal areas, mainly in the north eastern part of the island, face an onslaught from seasonal cyclones. First warnings usually start airing on TV and radio a few days before the cyclone hits, which gives people time to put their corruption scams into action.

It works like this: when the cyclone is confirmed, the person in charge of school procurements pays a local merchant to fabricate an invoice for school supplies. The wind and rains come and lo and behold the school storage room is inundated with water and all the supplies are damaged.

The school then submits a reimbursement claim to the central emergency fund for school materials. It explains how the storage room roof leaked and the supplies were ruined. The fake invoice is included in the claim. We couldn’t find out who actually got the money in the end, but clearly funds that could have been used elsewhere were diverted illegally to the school.

Unfortunately, this is a story that we heard from more than one head teacher.

If the school had a better accounting system and inventory control, this would never happen. Not surprisingly this is one of the key recommendations in our report.

In a less creative corrupt activity, it seems that some of our young, female teachers are sexually harassed by those with power over their appointments, namely heads of the Parent Associations (PA). The PA in many schools has the authority to hire and pay staff. Sometimes it seems they abuse that authority.

On more than one occasion we heard about young, female teachers being propositioned inappropriately. One poor lady reported to our staff: “I resigned rather than sleep with an old, ugly PA Chair full of fleas”.

These stories along with tales of false invoicing and fake receipts occur far too frequently. There are also instances of abuse of power by both teachers and parents. The former are contracted and then not paid, whereas the latter are asked for money they do not have to pay.

In Madagascar, we found, that 58 percent of head teachers, who are often responsible for managing school budgets, do not have financial training. If they did, they might be able to spot corrupt scams and help save scarce resources. Our schools need all the money they can get. It is a pity when that money is not used for what it should be: helping our young people get on in life.