Whistleblowing – An alternative to silence

5 May 2010 in Europe and Central Asia, Whistleblowing 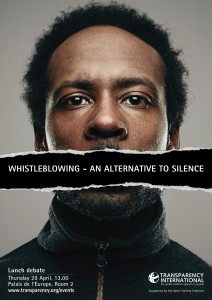 An alternative to silence

The Council of Europe Parliamentary Assembly (PACE) has just approved a landmark resolution on whistleblower protection. In line with discussions we had at Transparency International’s Annual Membership Meeting in 2009, the parliamentarians expressed appreciation and support for courageous people who speak out against wrongdoing in their organisations.

As part of a TI delegation composed of 15 delegates from Ireland to Turkey, I was in Strasbourg to attend the debate and vote. To bring some perspective to the issue, we organised a lunch debate with Pieter Omtzigt, Member of PACE and rapporteur on whistleblower protection, Eugene McErlean, who had blown the whistle on wrongdoing in an Irish Bank, and Cathy James from the British NGO Public Concern at Work. After the vote, Omtzigt expressed that he was pleased that the resolution was unanimously adopted.

I was impressed by the support from several PACE members to the resolution. The Russian deputy Mr Shaklein said that widespread organised crime meant in Russia that those working in the interests of society often needed their safety and security to be protected by the state. The Swiss deputy Mrs Fiala summarised the dilemma faced by whistleblowers: “The conflict is clear. What is more important: the fight against corruption or the loyalty of employees towards their company?”

So will the resolution lead to a change towards effective whistleblower protection across Europe? It is definitely a step into the right direction. At least it confirmed that this protection is urgently needed.

Now the CoE needs to undertake the necessary steps to turn words into actions so that there is an alternative to silence.