20 May 2010 in Africa and Middle East, Anti-corruption movement, Events, Measurement and Research, Region

How do you get governments that claim to be preoccupied with more immediate priorities and issues such as political instability in the Arab world to pay attention to corruption? 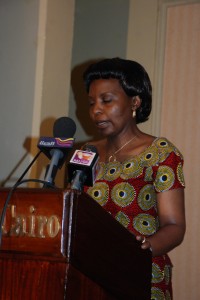 This was the fundamental question that began our day as I accompanied Chantal Uwimana, Transparency International’s Director for Africa and Middle East during an interview with a Reuters reporter in Cairo. We were in town for the launch of a comparative overview of in-depth national assessments of transparency and accountability in the key institutions and sectors of Egypt, Lebanon, Morocco and Palestine. (All information can be found at our In Focus)

Chantal’s answer sought to be fair but firm: corruption is not a separate issue. Its manifestation and impact is cross-cutting. Perhaps, if those rulers paid more attention to transparency and accountability –allowing citizen participation and reporting publicly on budgets, public procurement, how a project is run and decisions made- some of those daily problems would perhaps not exist or be minimised.

The question was actually a prelude to the issues that would surface throughout the day, during a presentation of the report and a panel discussion on good governance held earlier this month. Some 100 representatives from civil society, the diplomatic community, government agencies and the media, escaped Cairo’s extreme heat to join the anti-corruption debate. The event was open to the press and the cameras of Al Jazeera were rolling the entire time. Simultaneous translation made it possible for all to follow the brew of analysis, discussion and demands for improvements that made up the afternoon.

Opening the event with a speech, Uwimana set out to define the essence of good governance and why it can only flourish in a corruption-free environment. Considering the many challenges faced in the region, she highlighted the virtual inexistence of checks and balances while acknowledging that “conflict and political turmoil have taken their toll on the fight against corruption”. 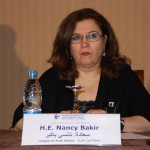 Dr. Nancy Bakir, Commissioner-General for Arab Civil Society at the League of Arab States, relayed her recent encounters with some businessmen who extolled what they deemed the virtues of doing business facilitated by corruption. (This argument seems to be gaining attention lately, but that is a separate blog post.) Dr. Bakir’s point on the private sector role was welcome and her warm, gracious address appeared to signal an open door for anti-corruption at this key institution.

The relevance of that first question of the day quickly reappeared with the panel discussion, when Dr. Azmi Shuaibi of AMAN (the Palestinian TI chapter) stated that Palestinians are not prepared to “defend public works, public money” from corruption. This dire indifference he attributed to a historical feeling that public money is not managed for the benefit of all Palestinians, so the public has had little interest in ensuring that public funds are used properly. 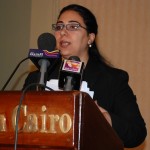 Omnia Hussien presenting the results of the report

The need to provide access to information, encourage oversight and give citizens a sense of ownership of their public resources, was echoed by Ahmed Bernoussi of Transparency Maroc and Omnia Hussien, TI Programme Coordinator in Egypt. An additional problem adding to public frustration and injustice in Morocco is a lack of independence in the judiciary and a need for comprehensive reform in this area, noted Ahmed.

In his overarching observations, Dr. Ahmed Sakr Ashour of Alexandria University, a regional expert and panellist that afternoon, pointed to state capture by rich and powerful elites as a trap that blocks the implementation of accountability mechanisms. Access to information, watchdog institutions, whistleblower protection –all things TI is recommending- are not promoted because they would diminish the lock on power held by such elites, he argued. He also identified a dangerous deterioration in communal ethics and a need to inject ethics into the religious discourse. Interestingly, Dr. Ashour was “astounded” to read TI’s recommendations in the report directed at the state. “I cannot imagine that the state, its elite, will give up the benefit of what they are enjoying just because of these reports,” he exclaimed.

Dr. Hani Shukrallah, Managing Editor of Al Ahram, who moderated the discussion, had some probing questions of a more existential nature. “Why do Arab nations give up their rights that easily?..Why is there such indifference to efforts to protect their resources?..Why are states looked upon as a patron?..People look at their own resources as a grant, why?” he asked cautiously, assuring us that he was by no means suggesting some sort of revolution.

Here, Dr. Ashour’s comments resonated and the Reuters question lingered. Dr. Shuaibi further observed that many Arab governments frighten their citizens to the point that they refrain from monitoring public works and concluded that “People feel alienated in their own country”. This isolation can be attributed to a widespread feeling that taxes are not collected for public benefit and that public funds are often seen as belonging to the ruler or president. This, in turn, creates a longing for a foreign passport, for places where resources are handled more fairly, he said.

“In the Arab world we are not citizens, we are nationals,” concluded Yahya Hakim of The Lebanese Transparency Association.

With this, the floor was open to questions.  First to claim the microphone was a representative from Egypt’s Administrative Control Authority -a government anti-corruption agency- who provided details of his agency’s role and strategy. Reading from a sheet of paper, he explained that the agency receives 1.500 complaints yearly and responds to them “by letter or SMS”. As he continued, the audience protested loudly and at the moderator’s request, the man brought his soliloquy to an end. The next speaker was given the floor. Before making his own point, this new speaker quickly contradicted everything the official had just said.