What should FIFA do about corruption?

Sylvia Schenk, senior advisor for sport at Transparency International offers some suggestions on what makes a good anti-corruption programme.

Clearly Sepp Blatter, the head of FIFA, football’s governing body, spent the holiday season mulling over the impact of the corruption scandal at FIFA. 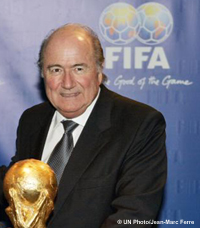 Sport plays an important role in the lives of fans and players alike. The suspicion of corruption damages our sense of truth and justice; we believe in sport and sporting heroes because we believe in level playing fields. Corruption can have no place in the world of sport; otherwise this essential purity will be tainted for generations of sports enthusiasts. The lustre of the beautiful game of football, for example, is already being tarnished by the allegations of corruption at FIFA, along with a spate of scandals involving match fixing in 2010.

Blatter’s New Year’s resolution to form an anti-corruption committee within the organisation could be a good response. But it could just as easily be a red herring, aimed at winning time for the storm clouds over FIFA to blow over, in the hope that people will forget about FIFA’s problems, and not ask questions about who runs the game they love in the run up to the organisation’s internal elections.

In reality FIFA does not need a new commission. It already has an ethics committee. If this had had more power and expertise and taken the initiative to deal with allegations in the past the recent problems could have been dealt with better or may not have happened. What FIFA has to emphasise and enforce is a whole compliance programme, not just reduce it to an ethics code and a committee but initiate a system that covers all areas of unethical behaviour, from conflict of interest to vote buying. FIFA could simply follow best practice already established in international organisations and the world of business.

I’d like to share a few words of advice with Sepp Blatter as he ponders how FIFA’s anti-corruption initiative and a committee might work. He must, for starters, consider the following:

And that’s just what FIFA can do in its Zurich HQ. The real challenge will be implementing the idea of anti-corruption within national federations. This will involve changing the culture within the football “family”, as Blatter likes to call it, to that of a modern, transparent and accountable administration on a global as well as on the national level.

This is something that a commission could do: convincing football federations and helping them find the right path.

First there must be a clear definition of what the committee is expected to do and how.

People want to know whether FIFA’s existing Ethics Committee will stay in place, be modified or be amalgamated into a new commission? Will the new commission just develop an enforceable compliance programme for FIFA and/or its member federations?

People will also want to know who is put on the anti-corruption committee, and why. Potential candidates and their affiliations must be published, as should their any related remuneration. Independence of the committee and its members is a key factor.

FIFA is too often seen as an old boys club, accountable only unto itself. The best way to convince others that a change is going to come is to lead by example, starting with concrete action in Zurich.

The success of Blatter’s anti-corruption measures will depend on how quickly they take shape and how large their scope. A concrete compliance programme can and should be well in place before FIFA’s congress elections this June. Only then can Blatter prove that he is taking a risk to make a change. If the proposed commission just postpones real anti-corruption policies until after the elections to calm the delegates, Blatter’s New Year’s announcement will mean little more than a pre-match press conference.

This is an urgent matter for FIFA. With two board members and other key staff accused of corruption, and those board elections looming, the housekeeping cannot be put off any longer. The organisation has been criticised for opaque decision-making before. To set matters straight, all deliberations and reports must be published.

All this is a tall order for an organisation with a reputation for secrecy. But it looks as if Sepp Blatter has opened the door for a new beginning at the start of 2011. He is to be congratulated for that. There are millions of football fans around the world who will be happy to help him stick to his resolution. Turning a bright light on FIFA’s anti-corruption work would help bring back the shine.