Today Transparency International publishes its report on the transparency of oil and gas companies.

The report shows that the majority of companies do not reveal payments to governments in countries where the extract oil and gas.

So the prosperity of the Libyan people depends on how oil money is spent. It is now clear that until now this wealth has been used to keep a political clique in power for generations.

World leaders have been trying to find a way to have a positive influence in the Middle East. Our report highlights one area: the role of multinational companies who extract the mineral wealth so vital to the economy.

12 oil and gas companies reviewed by Transparency International operate in Libya, but only one (Statoil) operates with major transparency. No other company publicly discloses how much money it pays the Libya government to operate there.

This picture is replicated across North Africa. Of the 22 companies in our survey operating in Egypt, Algeria, Tunisia or Libya, only 2 disclose royalty payments to governments (Statoil and Talisman). The other disclose next to nothing, sometimes production volumes, or operational reserves. 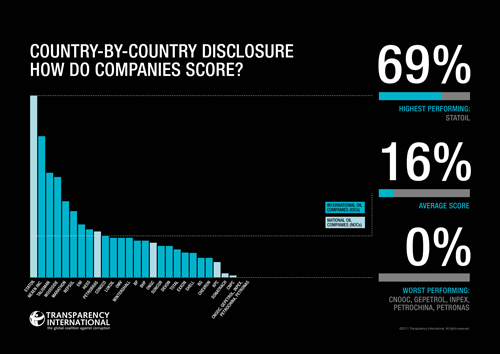 With change in the air, the question in future will be how to make sure that future oil revenues are a blessing for a growing democracy and sustainable development, not a curse.

To keep oil revenues more in the open in future, allowing citizens in resource rich countries to better hold their governments to account over the use of oil and gas revenue, we should look at the reporting rules that multinational companies adhere to.

These have to come from countries with major financial centres.

In 2010 the US passed a law that would oblige oil and gas companies listed on its stock exchange to disclose payments to governments in every country they operate in. Other governments, stock exchanges and international accounting bodies should do the same.