5 May 2011 in Climate Change, Financial Markets

This year’s Transparency International Global Corruption Report, launched this week in Dhaka, Bangladesh, tackles corruption and climate change. The message? Without better governance, climate change measures could go awry. The risk is corruption. The result could be lack of progress in the reduction of greenhouses gases, putting the planet at risk.

The new TI report collects more than 50 articles on corruption threats that could affect climate governance, such as policy capture, and it highlights the challenges that will arise as large amounts of money intended for climate change start to flow through new channels.

The need for transparency and regulation if carbon markets

Carbon markets already reflect many of the risks that are inherent to climate finance. Credits earned from reducing greenhouse gases can today be sold for US$15 for one tonne of carbon. But reductions in carbon emissions are not a tangible, making it crucial that there is a robust system for monitoring, reporting and verifying emissions. Trust in climate claims is essential as the basis for the carbon market, which is already worth US$ 144 billion. Yet cases of fraud in the market, documented in the report and elsewhere, are already weakening this trust.

The sums involved in climate change could match, and one day even surpass, development aid funding. Governments at the Cancun climate negotiations in December 2010 agreed to mobilise US$30 billion a year of fast-track climate change funding for 2010–2012, and US$100 billion a year by 2020 to address the mitigation and adaptation needs of developing countries.

These huge financial flows will raise the stakes for efforts to improve climate governance, to prevent bribery and misallocation of funds.

A lot of the money for climate change will be spent in the 12 countries the World Bank has singled out as most vulnerable to either drought, floods, storms or rising sea levels. However none of these countries score higher than 3.6 on Transparency International’s Corruption Perceptions Index (where 0 is extremely corrupt and 10 is very clean).

Because climate financing will come from several different sources – the UN, the World Bank’s Green Climate Fund, bilateral donors, and others – common reporting and accounting criteria are crucial for tracking funds. Good reporting enables us to follow the money, but also the carbon – to establish whether carbon credits are earned by projects that actually reduce greenhouse gas emissions or preserve forests, which store carbon naturally. 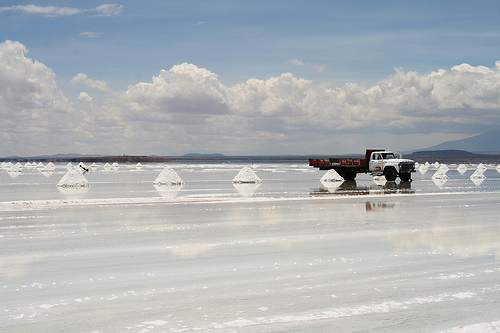 Finance for greener technologies is already driving investment in natural resources, such as land for biofuel production, or metals such as lithium, which could see an annual 10 per cent rise in demand as plans for electric vehicles develop. Half of the world’s known reserves of lithium are believed to lie in Bolivia’s Uyuni salt lake, for example. As Bolivia and other countries move forward with plans for extracting the resources crucial to a green future, they must take care that such resource wealth is well governed — and benefits both people and the environment.

Here, lessons can be learned from followers of the Publish What You Pay campaign and the Extractive Industries Transparency Initiative, who have promoted country by country reporting on revenues generated by the extractive industry, which is now reflected in the US Dodd-Frank Act. At the same time, these important multistakeholder initiatives have opened up a seat at the table for civil society, to represent broader civic interest. The same is necessary with green initiatives, to prevent a green resource curse.

Whether sourced publicly by governments or privately via markets, whether for mitigation or adaptations one thing is clear: climate finance will continue to grow. Given the risks we already know about existing aid and market systems, and those of new mechanisms, whose agendas and remits are in the making, we have a huge challenge to create a framework for accountable and transparent governance of this funding. Not only the fight against corruption, but the planet’s future, are at stake. If we act now, we have a unique chance to design a climate finance system with good governance from the get go. Let’s not miss the moment.