Human Rights on the WEF agenda

WEF in Rio de Janeiro was not limited to business and economy: there was also time for other issues. On May 28th I attended a very interesting session entitled “Meeting Modern Expectations: Human Rights and Latin America“. Conducted by Robert Greenhill, the panel included Mr. Alconada Mon (Argentina), Mr. Goicoechea Lara (Venezuela), Mr. Maradiaga (Nicaragua) and the Secretary General of Amnesty International, Salil Shetty. Although they referred to the importance of gender equality and women rights, no woman was invited to join the panel. Once again there is a huge gap between speech and action. 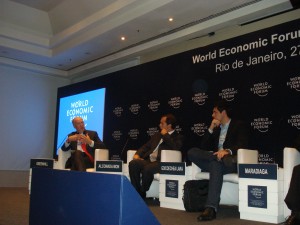 Alconada Mon stressed the importance of independent free press and the protection of the rights of expression and information as a means to consolidating democratic institutions. The role of social media was mentioned as a key tool to enhance involvement and participation, mainly of young people. Social media facilitate access to information and are also a powerful instrument of social agenda setting.