Cobus de Swardt, Managing Director of TI, writes from Cape Town where he is attending the Africa regional meeting of the World Economic Forum

At WEF Davos in January, the beginning of the revolution in North Africa was on everybody’s lips. Four months on in Cape Town, you can see from the ideas being put forward that it is on everyone’s minds, especially the organisers who put the very apt title Speaking Truth to Power on one session I spoke at.

In the 1980s, truth spoke to power in the language of human rights a concept that sought to compensate for decades of leaders’ failure to hear calls for reform. This language defined and drove the popular demands for change, bringing the Cold War to an end.

Calling on governments to respect human rights was a way for people to tell those in power that nobody is above the law. 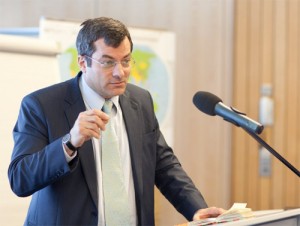 In recent years, as the lack of public accountability has been a key driver of the financial and economic crisis, so demands for greater accountability have become a driver for change in their own right.

What we have seen in the past months, and will see in the coming decade, is an irreversible quest for public accountability: one that cannot be co-opted by older ways of thinking, controlled by traditional institutions or misinterpreted by traditional media.

If leaders try to ignore the movement for public accountability, if they try to control the tide for change, they will be overwhelmed by a flood of social movements and social media.

With power sitting with the people, in whatever part of the democratic spectrum a country falls, no amount of political capital from past glories will allow leaders a blank cheque to justify their actions.

We should not talk of people speaking truth to leaders anymore: the onus is on leaders to speak truth to the people.

I think these words spoke to some of the feelings in the room yesterday. Young people in the audience stood out especially with their lack of deference to the established elites. This new generation is telling us that it is time for change, and they are interested only in accountability today and tomorrow, not yesterday.

Theirs is an energy that any movement for accountability must tap.

Everyone is accountable: these are exciting times we live in!