Timed out? Italian authorities told off by GRECO – and by their citizens

The Italian authorities, however, have completely misinterpreted our research. According to a report of GRECO, the Council of Europe body which regularly monitors compliance with anti-corruption standards, the Italian authorities claim that “the situation in Italy does not differ much from that of other European countries analyzed in the … (TI) study.”

Of course it differs! Our findings leave no doubt that the Italian regime of statutes of limitation is singular in the EU context in providing impunity for alleged corrupt offenders. In addition, while many EU member states have recently introduced reforms that lengthen statutes of limitations to ensure the effective prosecution of crime, Italy went in the opposite direction.

GRECO, however, clearly understood our message. It notes that “the study of Transparency International…specifically refers to the statute of limitations regime in Italy as constituting a serious problem” and considers the findings as one of the “starting points… which should prompt the authorities to undertake further action in this area”.

Statutes of limitations are but one point of criticism of Italy in the GRECO evaluation report. While recognising some progress, GRECO clearly finds that in Italy “the current level of implementation (of anti-corruption laws) leaves considerable room for improvement”. The report stresses the need to adopt codes of conduct and measures to prevent conflict of interest for members of the government and parliament. 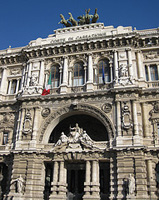 Italian citizens have recently taken side. In a referendum earlier this month they were asked whether the Prime Minister and members of the Cabinet should be allowed to fail to appear in court hearings because of a “good reason”, a special legal immunity that was partially struck down by the Supreme Court. (A similar law, the so-called “Lodo Alfano”, had already been rejected by the court because of non-compliance with the Italian Constitution.)

In a symbolic act almost 95 per cent of the voters (around 57 percent of all Italian voters) opted to abolish the “good reason” impediment.

The referendum shows that Italians have begun to assume responsibility for fighting corruption in their country; a long-awaited sign of hope.