The power of consensus: working out a new way to develop sustainable renewable energy

Donal O´Leary is a Senior Advisor to Transparency International.

Last week I spent many hours in Brazil contemplating the power of water and water power. The city of Iguaçu is the perfect place to do this. 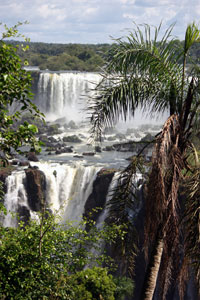 Iguaçu is famous for its majestic falls, which are a World Heritage Site visited by thousands of tourists annually and the awe-inspiring 14,000 MW Itaipu hydroelectric project on the Parana river on the border of Brazil and Paraguay. This is the largest hydroelectric project in the world in terms of power generation, accounting for approximately 20 per cent of Brazil’s electricity supply and 90 per cent of Paraguay’s.

I was in Iguaçu representing Transparency International (TI) and the Water Integrity Network at the launch of the Hydro Sustainability Assessment Protocol, at the World Congress on Sustainable Hydropower Development. The protocol is a tool that allows all those involved in the planning and building of a hydropower plant to assess its impact and minimise the detrimental effects at all points in the process.

At the core of this process was a deep respect for consensus building around a single idea: how to develop hydropower in a way that benefits everyone.

I had the opportunity during this visit to accompany a former Cree First Nation Chief from Canada to visit a Guarani Indian Chief of the local indigenous population. Both Chiefs discussed the impacts of hydroelectric projects in Canada and Brazil respectively and why it is so important to get all those involved around a table, something the protocol encourages.

That is often easier said than done. During the process when the protocol was designed we struggled to develop a product that everybody could agree on and be proud of. Hydropower is complex and there was the need to talk though and agree on a common approached to some difficult and knotty issues, such as compensation for displaced populations, assessments of the effects of hydropower on ecosystems and endangered species to name just a few.

Surprisingly enough, there was relatively little controversy in relation to the proposals made by TI to address corruption issues in the hydropower sector. However there were many discussions on how to handle disclosure of information, with civil society promoting the benefits of transparency in making public as much information as possible and industry holding the view that confidentiality is a cornerstone in doing business, particularly in relation to the economic and financial aspects of bidding.

Another issue that generated a lot of discussion was the issue of free, prior and informed consent (FPIC) insofar as it affects indigenous people affected by projects, with the Forum non-governmental organisation representatives holding the view that FPIC was now ´best practice´ in the hydropower industry and industry being of the view that FPIC was ´not proven´. The Protocol reflects the views of the NGOs.

These issues were thrashed out as the Forum met nine times at locations across the globe. The finished document also reflected the results of pilot trials of the protocol in 13 countries and inputs from nearly 2,000 people.

The glue that held the Forum together was the growing mutual respect and trust between all the members. At the end, I believe that we have a very important tool that should help limit the negative impacts of hydropower during design, construction and operation as well as contain corruption and promote a sustainable alternative to fossil fuels.