Will the World Cup and Olympics bring more corruption to Brazil?

By Sophie Amelia Mendes from the IACC team, and Stella Borzilo, from the Americas department, at Transparency International.

For a few days every year since 2001, dozens of people marching through the towns and villages of the arid Brazilian North East. These are the people who are speaking out against corruption in Brazil, taking part in the March against Corruption organised by the “Popular Force-Task” (in Portuguese: Força-Tarefa Popular), a group who coordinate society to take action against corruption. More than a hundred people take part in the walk, which can be up to 350km in distance and the size and length of the March demonstrates how passionate the anti-corruption movement in Brazil is.

The marches, organised “against corruption and for life”, take various routes with various participants each year, picking up followers along the way and receiving donations of food and shelter from local people. In 2005, the crowd made their way down to the Conference against Corruption organized by the Brazilian government in Brasilia to voice their concerns.

Now there are more reasons and more opportunities than ever for the public in Brazil to come together and speak out against corruption in their country. Preparation for the World Cup in 2014 and the Olympics in 2016 presents many corruption challenges for the country.

Last month, for example, the government coalition deputies in Brazil approved a bill that would keep the preparation for these events, including massive infrastructure budgets, secret, and therefore away from the public scrutiny that would identify dodgy deals. They had until 1 July to come back on this much criticised move. In the end, the deputies took a “diplomatic” decision because of critics made by the opposition in the Congress. 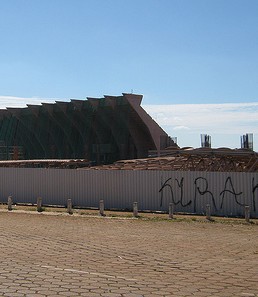 They changed the text and, now, the budget will be public, but just after the public tender process. So, everybody will know how much will cost the stadiums’ reforms, for example — but just after the works start. The positive point in that the control agencies in Brazil (like the Office of the Comptroller General) will monitor the costs since the beginning.

The decision, however, is still being discussed on the political mainstream: the Senate said that could reject it and, in the Federal Supreme Court (STF), some ministries have commented that this is bill does not comply with the Brazilian constitution.

Josmar Verillo, President of Brazilian section of TI, AMARRIBO, recently warned in an interview about the corruption temptations that these events will create: “The amount of money being deployed and the need for quick decisions on contracting has generated a lot of concern about corruption”.

That is why the UN Global Compact, AMARRIBO and the Ethos Institute have launched the “Clean Games Initiative”. Read more about it here.

Brazilian society, not only those who have participated in the March Against Corruption can use this opportunity to ensure corruption prevention is high on the agenda, not only in terms of ‘clean games’ (Jogos Limpos) but in Brazilian business and politics in general.

In November 2012 the Brazilian Government, Transparency International, AMARRIBO and the Ethos Institute will host the 15th International Anti-Corruption Conference (IACC), giving public and private sector, civil society, academics, journalists and anyone interested in the prevention of corruption the chance to discuss issues around corruption and forge solutions. With the resignation of Brazil’s Cabinet Chief following an ethics scandal, it is certainly an interesting time to be discussing corruption in Brazil.