Downtown Santo Domingo. Scooters dart daringly between towering SUVs. Huddled crowds spill from the windows and doors of battered minibuses, overtaking bicycles saddled with bulging mangoes. Faded umbrellas shield women from the glaring afternoon sun, while uniformed men stoop attentively over the young boys shining their shoes. Litter chokes the gutters and the smell of exhaust sticks to your skin.

It’s my first time in the Dominican Republic and I am a stranger to its subtleties, but two distinctive characteristics brought me here: The first is corruption. It keeps power and wealth in society’s upper echelons, while almost half the population lives in poverty. The second is an impending humanitarian disaster. A low-lying island state, the Dominican Republic may be among the first countries to be swallowed by rising sea waters triggered by climate change.

Corruption and climate change? Most people don’t see a connection. This is likely because they aren’t in the habit of thinking of climate change as a multi-billion dollar global industry. And wherever money flows plentifully, corruption is quick on its heels. 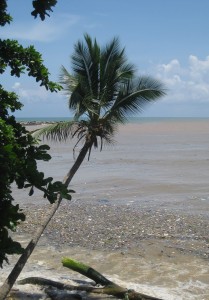 Recognising the point at which corruption and climate change might intersect, Transparency International (TI) this year launched its Climate Governance Programme. This involves TI chapters in Bangladesh, the Dominican Republic, Kenya, Peru, the Maldives and Mexico, all of which suffer high levels of corruption and all bracing themselves for an uncertain climatic future. Like most of the countries at risk of climate disasters, the Dominican Republic is in the lower tier of the CPI, scoring three out of ten.

Hosted by our Dominican chapter, Participación Ciudadana, we’ll this week be deliberating how best to strengthen governance systems and guard against corruption in climate policy and financing on both the local and global level, from the construction of coastal defence walls, to reforestation projects, to developing electric cars.

Last Monday, Dominicans held a nationwide general strike to protest the galloping price of food, water and fuel. As the country’s dependence on fossil fuels continues to cement poverty and injustice, investment in climate-friendly energy sources could forge a path to more sustainable development. But only if the money’s spent wisely and the needs of local communities are heard.

It is our hope that building robust checks and balances into the state’s climate finance architecture as it takes shape will set a precedent for good governance more generally, and eke out the corruption that has long made public funds mysteriously disappear.

At present this landscape involves a labyrinthine network of funds, government agencies, companies, finance institutions and contractors. It is complex, and relatively uncoordinated and untested, meaning money risks vanishing through blind spots or loopholes, decisions might be ill-informed, processes poorly managed and results substandard or misrepresented. Perversely, this could put populations and the natural environment at even more risk of climate extremes than they’d otherwise be.

Visibility will help ward against this. At TI we want more open policy, procedures and finance, we want public scrutiny and consultation, and accountable decision making. As yet, many of the people and institutions governing our climate show little sign of this.

Take the UN Clean Development Mechanism; a global carbon offsetting scheme that enables industrialised countries to invest in carbon reducing projects in poorer countries in exchange for carbon credits. These credits are ‘get out of jail’ cards of sorts. Countries that own them don’t have to reduce their domestic greenhouse gas emissions by as much as they’re obliged to under the Kyoto Protocol, because it’s believed they’re doing so elsewhere. 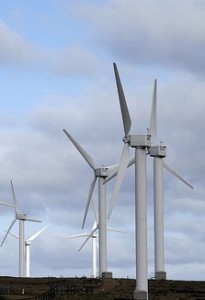 One of the abundance of proposals currently under consideration is the construction of a wind power park in Kinangop, Kenya. It would consist of 38 turbines and is expected to cost nearly US $146 million. This may well be a shrewd, admirable endeavour, but how can we be sure? How do we know that the turbines will generate enough power to counterbalance the carbon emissions they are effectively facilitating? And how can we guarantee that the plant will fulfil its terms of contract by benefiting local populations?

The simple answer is that under current circumstances, we can’t.

The decision as to whether or not the plant is built falls with the Clean Development Mechanism’s Executive Board, who receive such a slue of applications it’s unlikely they can scrutinise each one with the diligence it deserves. In the absence of independent oversight, we also have no way of knowing whether, for example, a board member has personal ties to a developer, or seeks to profit from a contract.

Potential conflicts of interest don’t stop there. Evaluators employed to monitor projects once they’re underway are paid by the project developers, meaning they may have little choice than to offer glowing reports. As local populations have very little recourse to appeal a project once its wheels are in motion, they could be displaced, or their livelihoods put in jeopardy, all in the name of ‘clean development’.