Digital Technologies And The Arab Spring – Part one

In a two-part article, Johnny West, author of a new book based on his personal experience of the Arab Spring, writes about the role of social media in the revolution.

Sometimes hype is justified. Earlier this year, the airwaves and opinion columns of media around the world were full of talk of Facebook revolution in the Arab Spring, how social networking had shaped a new political era in the Middle East, shaking down a geopolitical balance of Arab autocracy that had existed for decades. 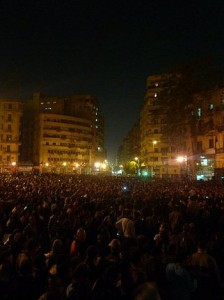 Then came the response from the heavy-weights, commentators, academics, Middle East specialists: “Facebook Revolution” is naïve, propagated by cyber-utopians who don’t understand that the rest of the world doesn’t have broadband and that the revolutions in Egypt, Tunisia and elsewhere are about long-standing and complex issues like mass unemployment, crony capitalism and the stifling nature of dictatorship, albeit dressed with a veneer of liberalism and, in some cases, backed by strategic alliances with Western countries.

As indeed they were and are. But, after a few months kicking around the revolutions, hanging around in the small towns and back streets of North Africa and speaking to everyone you could imagine, I’ve come to the conclusion that the original hype is correct. These really are “Facebook” – Internet, mobile phone, social networking – revolutions.

They simply would not have happened without digital technologies. And what’s more, it’s only just beginning.

Those who would paint a limited role for the Internet and digital technologies tend to make two mistakes:

‘I honestly think Wikileaks had something to do with our revolution. It’s not that people didn’t know the facts already. But now it was in front of us, in our faces. We knew that the Americans knew. And we knew that they didn’t think a lot of Ben Ali, whatever they said in public…Humiliation. It had become humiliating to have a president like Ben Ali.’

Nabil, a professor at Kairawan University

The Internet’s role in social protest does not begin, and is not limited to During-the-Revolution, “the demo will take place at this spot at 3.30 on Tuesday afternoon”. A society’s exposure to a whole new universe of information – and by society we simply mean enough influential individuals in it, not a universality, or some flat percentage which ignores the kind of “social networking” people did long before Mark Zuckerberg was even born: around the kitchen table, at the bus stop, at your cousin’s wedding – sooner or later affects their self-identity, their aspirations and sense of place in the world.

This is what happened in the Arab Spring. Hundreds of thousands of bloggers, and through them tens of millions of their fellow citizens, experienced a great big Before-the-Revolution of personal expression – ‘This regime stinks and I have to tell the world’; solidarity – ‘Oh my God you feel that way too!’; even embarrassment – ‘Gosh, it seems like everyone thinks the Big Man is rubbish’.

In Libya, when the Internet started to reach two or three percent of the population in 2007 and 2008, so did Satoor, a cartoonist whose parodies of Gaddafi made him an object of mockery. Satoor’s cartoons were printed out, and imitated, in the towns of the east – Tobruk, Baida and Benghazi – hours after the rebels took them from Gaddafi’s forces. Clearly the ideas had been there for some time.

Once you have the Internet, it’s like a big Psst in your ear. However serious the oppression and your very real fear of the regime, you can never actually believe them again, and you know it’s the same for nearly everyone else. Gradually, it becomes hard even to pretend to believe them.

So what about now, in After-the-Revolution Egypt and Tunisia, and maybe other countries to come? Some interesting things are afoot.

Johnny West’s book, Journeys Through The Arab Spring, is out now.