The entry into force of the UN Convention against Corruption in 2005 was a big step forward in the fight against corruption, but it was only the beginning of efforts to make governments do more. 154 countries have now ratified the treaty (India, Thailand and Iceland are among the latest, but, controversially, not Germany), but what does this mean on the ground?

Today, there’s a buzz of review activity around the world as part of the first round of the review process for the UN Convention against Corruption (UNCAC), a process scheduled to last five years, and which is designed to ensure that countries live up to their commitments under the Convention. 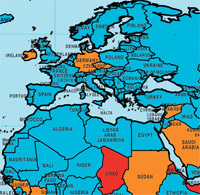 UNCAC monitoring headed into its second year in July of 2011 with a further 41 countries coming up for review, adding to the 27 countries covered in the first year.

What’s it all about?

The peer reviews – in which two countries review a third one – check to see whether governments are taking the required steps to criminalise different categories of corruption and whether they’re actually bringing cases against corrupt offenders.

Since governments sometimes paint a rosy picture of their performance, it is important that independent groups from outside government input their views to review teams.

We are working with the UNCAC Coalition of civil society organisations to promote such involvement. And as part of our efforts to let civil society know about that opportunity, we have developed a set of animated training videos on the UNCAC review process.

The training videos provides a compelling and fast-paced tutorial for civil society organisations and activists on how to use the review mechanism for the Convention to encourage governments to more effectively fight corruption.

Here is the introductory video, see the rest here.

Civil society participation in the Convention review process has a crucial role to play in making sure the Convention is carried out and that it fulfils its promise.

Why bother monitoring UNCAC implementation? Because if all 154 states party to the UNCAC fulfilled their obligations under the Convention it would significantly strengthen global anti-corruption efforts.

• It would, for example, result in improvements in public sector integrity as well as in public procurement and public sector financial management
• It would mean increased enforcement activity to punish those engaged in bribery, embezzlement and money laundering
• And it would also mean better law enforcement cooperation across borders to counter corruption, including in efforts to return stolen public assets.

In short, it would make a major contribution to stemming corruption and the damage and injustice it causes worldwide.