Is the Arab Spring coming to Algeria?

A number of Facebook pages, Youtube videos and other social network sites are calling for a peaceful demonstration today.

So far, Algeria, which ranks higher than Libya but lower than Tunisia or Egypt on our Corruption Perceptions Index, has remained one of the few countries apparently untouched by the revolutionary fervour sweeping the Arab world. Apart from a few small demonstrations, the streets have remained calm and President Bouteflika was quick to respond to the first protests by introducing oil and sugar subsidies and announcing plans for political reform. At the end of January, he cancelled the emergency law that had been in place for many years, replacing it with an anti-terrorist law allowing peaceful demonstrations and limiting the extent of interference in citizens’ private lives permitted to public authorities. 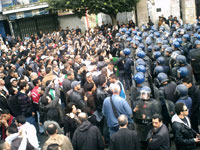 This led to a relative calm while events unfolded elsewhere in the region, but six months later, the mood in Algeria is becoming restless in the past few weeks. New election laws and the law of political parties will be discussed in the autumn parliamentary session, but the project for constitutional amendments is not scheduled to begin until after the parliamentary elections in 2012, which some analysts have attributed to the President’s distrust of the present parliament. Although the government has been rocked by a number of financial scandals this year, Bouteflika has made no move to openly sanction the ministers involved. This link shows the authorities response to the calls for demonstrations.

The perception that misuse of public power is going unpunished is not limited to the government. In July the mayor of Zeralda, Mouhib Khater, was imprisoned after submitting a number of charges for corruption against businessmen and local politicians in his city. 60 days later, and despite the fact that almost all charges against him have been dropped, Mr Khater remains in prison. He is awaiting a further trial, for which the date has not yet been specified.

On 16 August, Transparency International called upon President Bouteflika and the country’s Ministry of Justice to intervene in the case. We also want President Bouteflika to install a commission to thoroughly investigate commercial real estate developments that Khatir has tried to draw attention to, to determine whether there has been corruption.

This commission should also look at whether Khatir has been the victim of malicious prosecution for being a whistleblower. Lack of channels for reporting corruption, and protection for those who do, is a major barrier to transparency in the region, and one of the first things activists are looking to change in post-Arab Spring countries.

Demonstrations and support groups for Mr Khater, who is a noisy and popular opponent of corruption, have led to little clarification of his case, which is becoming symbolic of corruption at middle levels of authority.

Will Saturday herald a new age for the people of Algeria, where living costs and youth unemployment are rising worryingly fast? The common wisdom, that memories of a horrific civil war are still too fresh for a real uprising to take place, certainly carries weight. And it’s worth noting that the criticisms are directed at the government and not at Bouteflika himself, who is still perceived as having brought stability and unity at a troubled time. But even if the protest stays online this Saturday, the calls are a clear warning to the Algerian government that the Arab Spring has not quite passed them by.