Climate finance in Bangladesh: Where has all the money gone?

It was slippery in parts so she took my hand, steering me gently from one dry spot to the next. The path soon gave way to sludge, punctured with bricks for steppingstones. Her house was one of a cluster of three clay bungalows, perched upon a shimmering expanse of mud. Visiting this woman’s home was visiting a foregone conclusion. Before too long it will be underwater

Dacope is a small settlement in Bangladesh’s southern Khulna district, where the green on the map begins to tangle with a mesh of blue. Home to three large river systems, a low-lying delta plain and a lengthy coastline, Bangladesh is battling climate change on a number of fronts. In recent years it has suffered a higher incidence of tropical cyclones and the merciless tidal surges that follow. Bit by bit, it is also being closed in on by rising seawater, which seeps into the agricultural land, harming crops and sacrificing livelihoods. Despite the influx of millions of dollars of climate finance into Bangladeshi coffers, villagers here say they’ve seen no evidence of it.

“At the core of the strategy to face climate change is the potential availability of an unprecedented amount of resources. As we all know, more resources bring a greater scope and potential for corruption,” warns Iftekhar Zaman, Executive Director of Transparency International (TI) Bangladesh.

Corruption has long aggravated levels of social injustice in Bangladesh, depriving children of access to education, increasing poverty and hunger, and closing the door to basic healthcare provision, particularly for the poor. TI Bangladesh’s 2010 national household survey found that more than four out of five households encountered corruption when interacting with public services and state institutions that year.

Climate money may be relatively new to Bangladesh, but it will be flowing through familiar channels. Wary that funds risk being hijacked by corrupt interests, TI Bangladesh has begun shining a light on them, to ascertain where money’s coming from, how it’s managed, what it’s spent on and why.

Answers to these questions can be hard to come by, particularly at the contracting level. More often than not bidding processes are closed, exposing them to potential rigging or undue influence. To date there has been little sign of independent oversight or quality control during project implementation. Financial audits are reportedly rarely carried out, and when they are they usually occur after a project’s completion, once the money’s been spent.

Just south of Dacope we encounter a community of climate refugees. Forced out of their homes by intruding water, many have populated an old school house. Others have fashioned shelters from reeds and plastic sheeting. These people’s stories paint a dispiriting picture of levels of integrity in local government. A chunk of the money earmarked for flood defence measures has never materialised, they say. Some embankments were never built, others are not as high or robust as their blueprints prescribed. As such they’re ineffectual.

As rock sediment continues to course into Bangladesh’s flat plains in the south, sent by the melting Himalayan glaciers, it corrodes the riverbanks and basins, effectively turning once contained rivers into sprawling lakes. A local official tells us that budget allocations for dredging sediment here were directed elsewhere, and the work was never completed.

Disaster is advancing on Khulna district, announcing itself in sodden footpaths and bloated paddy fields. Climate finance needs to support people to adapt to climate change. No one can afford for that not to happen. The government of Bangladesh has expressed commitment to ensuring that processes of distributing funds are reformed so as to achieve broad-based social and environmental benefits. TI Bangladesh will be working with them and with local communities to help ensure that happens.

All photos by Alice Harrison. 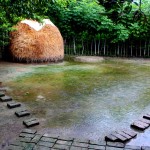 Looking out onto my host’s backyard 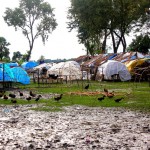 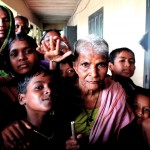 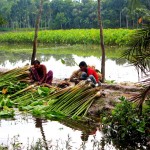 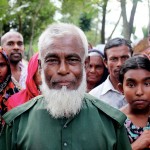 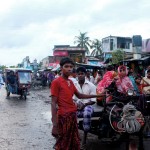 Shortly before the heavy skies parted 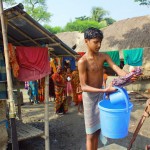 Water from the well is unfit for drinking

Villagers’ earth huts are separated by large tracts of water 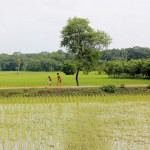