Climate change and corruption risks in Peru: The launch of TI’s Global Corruption Report on Climate Change in Lima

Peru is one of only 17 megadiverse countries, and home to around 80 per cent of the world’s biodiversity.  50 per cent of Peruvian exports come from the exploitation of biological resources, a rate that is steadily on the rise.  This rich potential is threatened on a number of fronts.  Climate change is one of them. 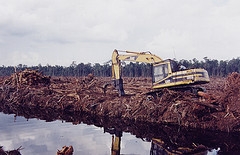 Transparency International’s 2010 Global Corruption Report addresses the issue of climate change and its relationship to corruption risks in a comprehensive and clear way.  “I would strongly recommend that everyone reads it,” said Manuel Pulgar Vidal, Executive Director of the Peruvian Association of Environmental Law (SPDA), one of Peru’s most respected environmental NGOs.  Vidal introduced the report along with Hugo Cabieses, the Environment Vice Minister, at a launch event organised by TI’s Peruvian chapter, Proética, at their headquarters in Lima.

Pulgar Vidal outlined the links between the global context illustrated in the report and the situation in Peru, taking the case of forests as a prime example.  “Corruption is rampant in the forestry sector. The huge volume of funds which will flow into the country to counteract deforestation might be at its mercy”.

Transparency and accountability are corruption’s best cures. According to a number of studies in Peru, levels of transparency surrounding the decisions and management of sectors related to climate change are low.  A recent report shows that the websites of public institutions directly involved in forestry at national and sub-national levels fulfill only 46 per cent of obligations outlined in the Peruvian law on transparency –enacted almost a decade ago.  The same source sheds light on a lack of formal mechanisms to promote and facilitate the involvement of vulnerable groups like indigenous and peasant communities in decision making processes, a situation which is likely to change since the new government entered office in July.

On the web pages of the former Ministry of Environment , the amounts of money approved for projects for climate change adaptation are not listed. In the case of mitigation projects under the Clean Development Mechanism and REDD, some funds are listed and others are not.  Of the published funds, the total value of investment over the next 50 years reaches US $1000 million.  It is important to stress that a number of projects aimed at protecting against the effects of climate change are carried out by regional and local governments, with very heterogeneous levels of transparency and public participation standards.

In the face of this, Proética’s Executive Director, Cecilia Blondet, invited the audience, comprising representatives from civil society and public institutions, to join a network which Proética is creating with the help of the Peruvian Association of Environmental Law, aimed at advocating for the transparent and accountable management of these funds.  This initiative is part of TI’s Climate Governance Integrity Programme, which is being implemented in another five countries:  Bangladesh, Dominican Republic, Kenya, Maldives and Mexico.

Vice Minister Cabieses responded to the invitation by saying that the Ministry, under its new leadership, is eager to support civil society initiatives related to this sensitive issue, and made a commitment to engage with this one.