Where the Money Can Hide: The New Financial Secrecy Index was published today

Christian Humborg is the Managing Director of TI Germany

When a police officer is bribed, usually two people are involved: the bribe-taker and the bribe-payer. In larger corruption cases, a third person is needed: the bribe-hider. Bribe-hiders don’t stash the bills under the bed. There is a global financial services industry for non-residents which allows tax evaders, bribe-takers, weapon traders and human traffickers to hide their proceeds. 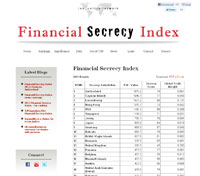 Of course not all banking employees, consultants and lawyers in secrecy jurisdictions on the financial secrecy list happily accept illegally acquired proceeds. The Financial Secrecy Index (FSI) rather points to structural weaknesses to allow criminals to use loopholes to feed the money back into the legal system.

Today, the second edition of the FSI was published, covering 73 secrecy jurisdictions. Tax Justice Network’s FSI nicely complements our Corruption Perceptions Index, which looks at the demand side (or bribe-taking) of corruption, and Bribe Payers Index which looks at the supply side. For example, it highlights the fact that always stood out for me: while Singapore is one of the countries where public sector corruption is perceived to be the lowest in the CPI, it is one of the most secretive financial centres world wide.

With the BPI being published next month and the CPI in two months, it will be the first time that all three dimensions of corruption are covered in one year.

The top country in 2011’s FSI is Switzerland, followed by Cayman Islands and European Union country Luxemburg. The calculation of the FSI is focused on two factors: the secrecy score which is based on 15 different indicators; and the global scale weighted according to a country’s share of global offshore financial services activity. Secrecy and global weighting are then multiplied to determine the ranking.

It is worth looking into the 15 indicators in depth and studying the country profiles that come with the FSI. It is the merit of the Financial Secrecy Index (FSI) to not only shine a light on shadow financial centres but to offer such detailed country-specific information on structural weaknesses.

Firstly, the United Kingdom’s rather modest secrecy score. TJN explains that the UK apparently runs satellite secrecy jurisdictions: “Through capturing offshore business from countries around the world, this British network of secrecy jurisdictions has been, since the era of globalisation began in the 1970s, among the most important reasons for reach and power of the City of London”. Examples are the Cayman Islands, Jersey, British Virgin Islands etc.

The other surprise to me was Germany in the top ten. Failure to ratify the world’s most important anti-corruption treaty, the UN Convention against corruption, clearly did not help Germany’s its secrecy score. What really affected the German position, however, was that Frankfurt is the largest financial centre in continental Europe. Global Financial Integrity points out that Germany is the world’s sixth largest holder of private, non-resident deposits.

Every time academics and activists put a complex issue in a one-dimensional ranking, you can ask questions about the methodology. Transparency International has plenty of experience of these discussions about its own indices. My doubt of the FSI’s methodology, from an anti-corruption perspective, is the use of a global weighting. If a financial centre would be able to attract tons of money while having a low secrecy score it might still be at the upper part of the list. If there are reliable estimates of the size of illicit financial flows into a country, this might be an alternative number to consider.

Having said that, I understand that an anti-secrecy activist has to highlight the responsibility which also large financial centres carry worldwide. For anti-corruption and anti-secrecy activists, clearly the issues underlying the secrecy score indicators have the biggest impact on attempts to make the financial sector more transparent.