A friend of mine sent me a photo of her and her newborn occupying a park in Wall Street.  This friend is well-to-do and while her leanings have always veered to the left, she has never manifested what one might call a propensity to protest.  Things have changed. 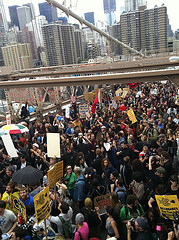 Driven by a perception that little has changed on Wall Street since the financial crisis and the hundred billion dollar bail out, the Occupy Wall Street (OSW) movement has captured the imagination of people around the world; an instance of virtual-aided analogue protest going viral.  It seems clear that the movement’s growth and capacity to captivate national and international audiences stems from its ability to embody, in the most literal sense of the word, some very deep frustration in the United States about who seems to be getting left behind in the massive deal-making and bail-out-package-reaching by politicians and big corporations.

Given the excitement that OWS has raised, it might be somewhat surprising that it has not capitalised on the global attention to advance a set of demands that reflect some of the systematic roots of the problems OWS claims it wants to tackle: corruption.  This has an explanation, based on the morphology of the movement itself.  The movement, who’s decision-making body is called the General Assembly, describes itself as “a horizontal, autonomous, leaderless, modified-consensus-based system.”  As a result, it finds consensus-building, such as to come up with a focused list of core demands ”really hard”.

As a symbol of direct democracy, the message sent by the occupation of public sites in NY and around the country is “a pretty powerful statement against the corruption that Wall Street has come to represent.”  As Betsy Reed points out in The Nation, “Of course, we need policy ideas…[b]ut sometimes you also need a spark.”

True. But the question remains, can OWS take it farther than that?  If not, that spark will be remembered as an example of how taking back the public square no longer leads to lasting social change. The draft lists of demands floated by OWS activists on their website vary wildly in scope and aim.  Also, they do not always address the systemic drivers of corruption that have helped bring the US into crisis, such as the failure of government to regulate Wall Street or the severe weakening of political finance reforms. Some demand proposals are closer to the mark.  Whatever final demands emerge, if any, will only help a push for lasting change if they touch much more on treating the causes rather than the symptoms behind the increasing influence highly concentrated wealth has on politics.

If OWS is serious about limiting the abuse of power by very wealthy interests, they may want to focus their demands on the longer road of powerful structural change such as bringing political finance reform back to life through the legislature and pushing for greater transparency in the international finance and banking sectors.   That will be really, really hard.