Over 150 governments are meeting in Morocco this week to discuss the UN Convention against Corruption, the only truly global treaty on corruption, at a conference known as the Conference of States Parties which convenes to make critical decisions about the future of the convention and the global fight against corruption. The following is adapted from a speech given by Christiaan Poortman, TI’s head of delegation, on 25 October 2011 in Marrakesh, Morocco.

This is a special moment, one when the relevance of the UN Convention against Corruption (UNCAC) and the broader fight against corruption is particularly clear. 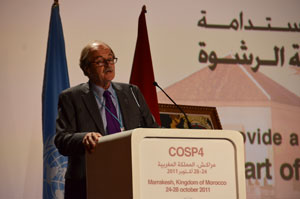 The events of the Arab spring underscore both of our key areas of focus at this Fourth Session of the Conference of States Parties (CoSP) to the UNCAC, firstly the importance of, and potential inherent in, civil society involvement; and, secondly, the need for strong cross-border anti-money laundering and asset recovery measures. The rapidly unfolding events in the region should provide added momentum to the important task we have undertaken.

Transparency International recognises that the Convention review mechanism, which was adopted at the third session of the CoSP in 2009 in Doha, is performing significantly better than initial expectations.

But we are still concerned about the wavering of some countries in honouring their commitment to the involvement of civil society in the Convention review process, a role that is enshrined in the Convention itself and supported by a written opinion from the UN Office of Legal Affairs. The Arab Spring has made clear that there can be no effective fight against corruption without citizen involvement, and that countries ignore civil society at their own risk.

The events in Egypt, Libya and Tunisia also highlight another long-standing, critical issue that we have come here to address, namely the return of stolen assets and ensuring that the global financial system is not instrumentalised to launder the proceeds of corruption. 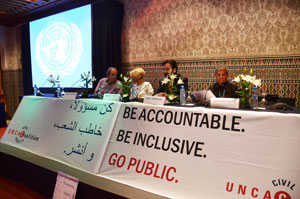 In this spirit, we applaud the Stolen Asset Recovery Initiative’s (StAR) report “Barriers to Asset Recovery” and its key recommendations which aim to facilitate judicial cooperation in the area of asset recovery and allow for rapid tracing and temporary freezing or seizing of assets. This should include enforcement of requirements that banks identify the beneficial owners of funds, and that they identify customers who are Politically Exposed Persons (PEPs) and report suspicious transactions made by them to the Financial Intelligence Unit.

We have a limited time together here in Marrakesh and we bear a great responsibility. Let us move forward with a willingness to take bold action so that we can do more in the fight against corruption. The billions of people we represent here deserve nothing less.