The fight in Libya continues – this time it’s against corruption

Although the battle for democracy has ended in Libya, the fight against corruption is still being waged. Death threats continue against one activist, who remains determined to stand up and denounce corrupt acts as he sees them. The following was published in the Newsletter of the 4th Conference of State Parties to the UN Convention against Corruption (UNCAC) that took place from 24 – 28 October in Marrakesh, Morocco.

Ibrahim Ali, the chairman of the Libyan Transparency Association and a financial analyst by profession, is impatient that his country is losing time in investigating and prosecuting corruption that is common in Libya. “It’s better now than under Ghaddafi, but the revolution will be for nothing if we are not successful in stopping corruption,” according to Ali, who attended the UNCAC Conference in Marrakesh. 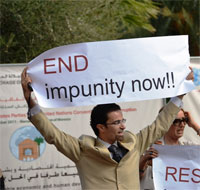 Libyan civil society is in its infancy, Ali says. “We are starting from zero because we never used to have NGOs in the last 42 years. It’s easier in Egypt because NGOs were there to organise after the revolution but in Libya, we don’t even have a constitution!”

Ali started his NGO on 5 May 2011. Already, he has lodged a major complaint of corruption with the National Transitional Council (NTC) but is frustrated by the slowness of the new authorities to investigate and prosecute. “We need to activate the UNCAC and work fast. They know how to make the money disappear, so the NTC needs to freeze accounts”. Libya signed the UNCAC in 2003, ratifying the Convention in 2005.

Ali has high hopes for the future corruption-free Libya, and sees good people hard at work in the NTC, but believes that nepotism and corrupt acts continue apace. He challenges the new government to fight corruption or face a further revolution: “We give you the power to use transparency for the good of the Libyan people,” he says. “If it’s abused, people will start to talk and act because many of their family members and friends died to stop corruption.”