In Russia, the fight against corruption goes online

Alexander Elkin and Aleksey Shlyapuzhnikov of the Center for Anti-Corruption Research and Initiative Transparency International Russia (TI Russia) talk about engaging the public in anti-corruption work with the help of new technologies.

Several years ago, an intellectual movement called Lebed (which stands for “the swan” in Russian) was created with the aim to bring together intellectuals, journalists, scientists and public figures of the Vladimir region in Russia. The goal of the movement was to unite the efforts of modern thinking people of the region to develop tools for efficient civic activism. From the very beginning the movement was in contact with TI Russia, because the main field for civic activism in Russia in recent years is anti-corruption work.

By August 2008, TI Russia launched Askjournal.ru – an anti-corruption online helpdesk which was later developed into a regional Advocacy and Legal Advice Centre (ALAC) in Vladimir with the help of the Lebed movement. The ALAC helped people to overcome administrative barriers and build relationships with government bodies in a legal and transparent way. But the number of complaints that could not be solved without participation of the media and without public support kept growing.

Therefore, TI Russia and Lebed decided to develop an independent instrument that exposes all of those problems on the internet and created their own regional online resource called vibor 33 (vibor means “choice” in Russian). This was significant because in Russia, the publication of information on NGO activities in traditional print or electronic media, especially regional ones, is almost impossible.

As of September 2011, the website gets about six thousand unique visitors a day. Visitors consist mainly of journalists and citizens who are looking for unbiased information about the region as well as public officials who refer to the website’s content in their speeches. The website is not political; it is not for or against the government.

Nevertheless, TI Russia and Lebed regularly deal with pressure from authorities for publishing undesirable materials or comments. But thanks to a well-designed legal status of the portal, all these attempts remain unsuccessful at the moment.

Since the start of the project two years ago, the website helped to solve some major problems of the Vladimir region. And more complaints about local problems that reach the ALAC can now be solved thanks to the website. Not all of these problems had to do with corruption, but they are always related to the city and regional economy or to the use of budgetary funds or the regional administration and development. To visualise these problems, Lebed and TI Russia introduced the “Map of the problems of the region” in 2010. 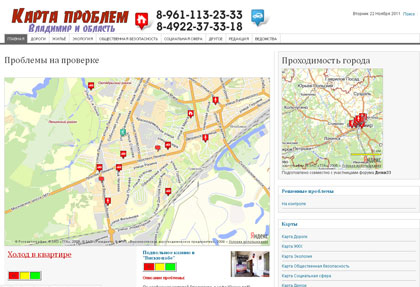 The map brings together a variety problems which are categorised and placed to different locations on the map in an interactive way.

In order to post these problems to the map any citizen can use the form on the site, a hotline, e-mail or regular mail. Once the issue is published, it is passed on for consideration by our lawyers or other civic groups and they make the necessary inquiries to the authorities. All communication on the particular issue is also published and thus becomes public. Once the problem is solved, it is transferred to the “under control” section of the map, where our volunteers and concerned citizens keep an eye on it.

From September 2010 to September 2011 citizens posted about 300 problems to the map and 150 of them were solved. In addition, some requests led to the solution of more complex problems. After our intervention, the city administration was forced to carry out repairs in 40% of public grounds in residential areas which had not been done for the previous 20 years. Thus, the “map of regional problems” became a bridge between active citizens and the administration.

The next step is to move the internet-based civic activism back to real life activism.

This blog post is adapted from a speech that Alexander Elkin of TI Russia gave at the Annual Membership Meeting 2011. The full speech is available here.