The wave of popular revolts that have swept North Africa and the Middle East show that the EU cannot ignore the existence of pervasive corruption beyond its borders. Its role in setting corporate standards and the linking of its trade and development policies can have a direct effect on the fight against corruption and improve the welfare of billions.

How can the EU ensure a coherent anti-corruption strategy in its external policies? These are some of the questions we sought to address our recent conference on corruption and the EU, hosted by the TI Liaison Office to the European Union (TI EU).

The topic of the EU as a global anti-corruption actor provides rich material for an exciting discussion. EU enlargement, trade, neighbourhood, and development policies, as well as recent proposals for extractive industries, are all areas where the EU has played or intends to play an important role in supporting anti-corruption. However, Dr. Bo Rothstein of theUniversityofGothenburgargued that 15 years of tackling anti-corruption in external policy has yielded poor results. This is a missed opportunity as research has shown a clear link between the quality of governance and human well-being. He also suggested that serious problems exist with the theories and definitions that have framed the problem of corruption in the past.

Marcus Cornaro, director for Neighbourhood in DG Development (European Commission) spoke of the recently reviewed EU Neighbourhood Policy, which aims to build deep democracy in the European Neighbourhood with strong support for anti-corruption efforts. He stressed the importance of domestic civil society in tackling corruption in the neighbourhood, with their unique analytical capacity and advocacy role, and outlined what the Commission is doing on this front to support progress in anti-corruption. 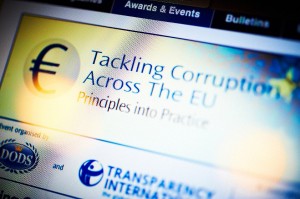 While external EU policy is essential to understanding the EU as a global anti-corruption actor, it is the internal-external linkage that is often missed: how internal policies of the EU affect corruption beyond its borders. MEP Dennis de Jong focused on the bribery of foreign public officials and the new EU legislation regulating extractive industries, which will require companies operating in resource-rich countries to report on a project-by-project basis.

Mariusz Witalis of Ernst and Young commented that until now the US has been the big actor on the scene in areas such as anti-bribery with the Foreign Corrupt Practices Act (FCPA). The question is, how fast will the EU be in playing catch-up? As Bo Rothstein said, “for a long time the problem of corruption has not been understood in its seriousness”.

This blog is part of a series on TI-EU’s recent conference on “Tackling corruption across the EU” that you may access here and here.

With additional drafting by Lucy Strang, Advisor to the TI EU Office.