At the end of a year where the political landscape in the Arab world has been transformed, Transparency International’s Palestine Chapter, AMAN, has organised a series of events in cooperation with local partners to mark International Anti-Corruption Day.

Events like this play a key role in AMAN’s attempts to engage people from all spectrums of society and keep the issue of corruption high on the political and social agenda.

On 7 December, AMAN brought together prominent Palestinian political figures, civil society activists and media representatives for its annual Transparency Conference, an opportunity to reflect on progress made in the past year, celebrate those who have taken a stand against corruption in Palestine and pay tribute to activists combating corruption throughout the region. This year’s conference focused not only on the Palestinian context, but also on the Arab world as a whole, with activists from all over the region sharing their experiences and hopes for the future through video link-up. 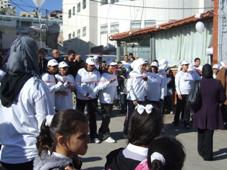 The conference concluded with the announcement of winners of the 2011 Bouazizi Integrity Awards, named in honour of Mohammad Bouazizi, the young Tunisian street vendor whose self-immolation captured the attention of the Arab world and became a catalyst for the Tunisian Revolution and the wider Arab Spring.

This conference opened a weekend of events including public debates, radio shows and community events. At Shu’fat Refugee camp over 100 young people took part in a sports marathon and in Bethlehem young Palestinian artists came together to paint murals illustrating the destructive effects of corruption on society.