Paul Hockenos is a Berlin-based writer and consultant who recently visited Dublin to work with TI Ireland to give exposure to its groundbreaking programme to protect and encourage whistleblowers. German photographer Dagmar Morath accompanied him. 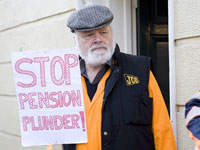 Irish pensioner protesting cutbacks in front of the national parliament in November 2011.

You don’t have to walk very far in downtown Dublin to run smack into grim fallout of the financial crisis and recession – it’s ubiquitous. A stone’s thrown from TI Ireland’s hole-in-the-wall office is the Occupy Dame Street Movement camped out in front of the Central Bank, a cement monstrosity looming over the corner of Dame and Grafton Streets. And every day there are demonstrations at the Oireachtas, Ireland’s national parliament, be it trade unions or citizens groups protesting the stark austerity measures that will take an average of 600 euros a month from the pockets of families.

And then there are the so-called “ghost estates” in the suburbs, creepy monuments to the exploded housing bubble. These abandoned construction sites lie in vast wastelands that border completed residential housing, some of it empty and now derelict, other units sheltering dispirited families who have no choice now but to stay put in their new homes, now worth a third of what they paid a few years ago.

The suburb of Castlemoyne, in north Dublin, was the site of rampant construction until the crisis hit. From one day to the next the building companies packed up and left, leaving partially built structures behind them. The houses in the background are uninhabited.

So this was the backdrop to the week of interviews I did with the “whistleblowers” working together with TI here. Not all of them worked in financial services but the link between the culture of secrecy, cronyism, and old-boy networks that they found themselves up against and that which made Ireland’s spectacular boom and bust possible was unmistakable.

Each of the people with whom I met endured grave consequences for their actions, from losing their jobs, to bullying and character assassination, to physical violence and illness. One man had blown the whistle on weak financial controls at the Irish Red Cross; another disclosed blatant harassment of women in the Irish military; one couple spoke out about reckless lending practices that ultimately led to the collapse of Irish Nationwide Building Society.

Of course the kind of abuse that they faced is not specific to Ireland. But they told me that because of its history under British rule, “traitors” or “snitches” are particularly despised – and sadly this is what many people think of whistleblowers. This made it that much harder for them to do the right thing and they found very little support from their colleagues, even those who had called themselves friends. While Ireland has limited whistleblower protections in place, they do not apply in all sectors and there are still significant gaps in protection, leaving whistleblowers open to reprisal when they choose to speak out.

Until TI Ireland took up the cause of the whistleblowers, these people didn’t have anyone. They were completely on their own, some of them even experiencing grave doubts that they had indeed done the right thing. The TI programme brought them together, something they all said was extremely important. I was impressed by what a difference such a small, dedicated office could make in the lives of these individuals. But it didn’t get any of them their jobs back.

A few of the people I interviewed are on their feet again, but most were jobless and struggling. Brave people indeed, who paid – and continue to pay – a very high price for their actions. Their courage moved me and testified to the difference one voice can make. Hopefully the legislation currently being drafted to protect whistleblowers in Ireland will make this path a smoother one for others in the future.