Corruption and the true cost of hosting the Games

Big sporting events bring excitement, pride and trepidation in almost equal measure to the winning country. The fireworks go off, but so do the alarm bells. Will the event have a legacy and help develop the (sporting) infrastructure and the society of the host country in a sustainable way? Will all the money be well-spent? Will there be long-term debts to pay off? Will the gleaming new stadia end up as rusty white elephants? Whose pockets will be lined?

Hosting the Commonwealth Games in New Delhi 2010 did not improve India’s image as intended. It shone a spotlight on corruption problems. Many people for example in Athens rue the cost of being Olympic hosts because of debts, and disruption. In Germany, home to the 2006 FIFA World Cup, one survey found people felt happier because of the event. It helped that the national team played well and the stadia continue to be well-used. With the Olympics this year, London will find out if the millions spent were worth it.

Pelé, arguably the most famous footballer in the world, just spoke out clearly on the necessity of fighting corruption. In 2011, Brazilian politicians drew public ire for trying to keep public spending on 2014 World Cup and 2016 Olympics secret. Read more.

Creating a plan, including cost and risk assessment, is a good first step to make sure that big sporting events produce a positive balance sheet from economic, environmental and social perspectives – the three pillars of sustainability. But there are no internationally accepted rules about what this means in practice and how it should be done.

Global Reporting Initiative, an organisation that since 1997 has been developing “how to” guidelines for standardised, comparable business reports on sustainability, has published an adaptation for events. It focuses on transparent systems that demonstrate events won’t hurt the environment, disadvantage any group (by unlawfully evicting people on the proposed site, for example), or waste money because the bidding process is unfair. 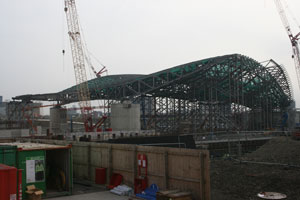 You can read it in full here. It is complicated for those not familiar with reporting and thorough, but I hope it will be adopted, especially by all those bidding for or organising games like the Olympics and World Championships in any sport. The International Olympic Committee supported the GRI in developing the new guidelines and the group organising the London Summer Olympic 2012 is already working along these reporting lines.

I want to highlight the section devoted to anti-corruption and detail what has to be expected from Transparency International’s point of view:

According to the guidelines, “Transparency and integrity during the bidding, site selection, supply chain management, infrastructure construction, delivery processes, event execution and communication have an impact on event reputation and final event success.”

This may seem blindingly obvious but stating a goal is the first step to reaching it. I would go on to add that all parts of the process from bid, to build, to the opening requires anti-corruption safeguards based on transparency, accountability and integrity. In practice this means the following have to be spelled out, and monitored with sanctions imposed if they are breached:

A detailed framework, such as the one published today, which becomes a de facto standard, acts as a safeguard against misdemeanours, crimes and widespread physical and reputational damage.