EU on the cusp of extractive transparency reforms

A newly discovered diamond field in Cameroon might contain as many as 250 million carats – 2.5 times the total world output of diamonds in 2007. The nearby village of Mparo, meanwhile, lacks running water, asphalt roads or telephones. Its mud-brick schools lack benches or books, No electricity flows through its power lines. An electrification project started last year lies dormant amid accusations of stolen funds.

The villagers have been promised 10 per cent of the taxes mine production, which should be enough to change their lives. But exactly what those proceeds will be is unclear as the South Korean company that won the mining contract does not have to disclose any information about its operations in Cameroon. Worse, the company is mired in corruption allegations amid claims that the reserve figures for the mine were artificially inflated to manipulate the share price, 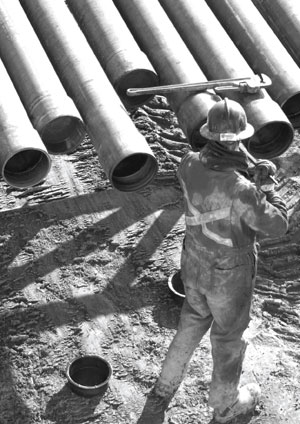 If multinational companies were required to disclose the details of their payments to governments around the world, the citizens of Mparo would know just how much of this they are entitled to. When EU ministers meet today, they have the chance to do just that, shaping legislation that could transform the oil, gas, mining and forestry industries, as well as the lives of millions around the globe. Some extractive companies, however, do not want to disclose details of individual projects like a single diamond mine.

This does not bode well for the Cameroonians and their hopes of a better life.

Without transparency, local communities rarely get a fair deal from valuable resources under their feet. Indigenous tribes in the Philippines received only a fraction of the royalties they are entitled to from mining in their ancestral lands: $1.2 million over the last 20 years, when the Tagonito mine in Mindanao alone generates about $1.5 billion in revenues each year.

Officials in copper-rich Katanga province in the Democratic Republic of Congo are entitled to 25% of tax revenues from mining projects. Frustrated with the lack of transparency surrounding state tax revenues they have started levying additional taxes on companies, further fuelling resentment and tension in a region with a history of secessionist conflict.

The solution to all these dashed hopes and frustrations is simple:  public disclosure of all the payments made by extractive companies to host governments for every project they operate.

Apart from giving indigenous communities and local authorities the opportunity to share in the wealth created by natural resource extraction, greater transparency would help ease the political tensions, corruption  and conflict that often result from the unequal distribution of natural resource wealth. European investment firms have also pressed for these reforms, because more disclosure promotes stability and transparency in resource-rich countries, enhancing the prospects for investment returns. A large extractive project can involve billions of dollars of investment over many years. Companies and investors need to pay close attention to how such projects are perceived by local communities.

Transparency is good for citizens, and good for business. The industry recognised this over 10 years ago when they joined  a partnership of companies, NGOs and governments, the Extractive Industries Transparency Initiative. An industry-wide standard that can deliver tangible benefits is slow to emerge, however. Transparency International and Revenue Watch Institute last year reported that country-level disclosure of payments and profits is the weakest area of company reporting. The reasons for this foot-dragging are not altogether clear. Some companies already volunteer this information even in the most challenging environments, such as Norwegian company Statoil, which works in Angola and Libya.

The solution is not only simple, it is politically feasible. In 2010, the United States led the way with the Dodd-Frank Act mandating oil, gas and mining companies to publicly disclose payments for every project they operate. This legislation covered a good portion of the oil and gas industry and raised the bar for extractive transparency.

Taken together, the US and EU legislation would help to create a global standard that will become the industry norm. Faced with this rising tide of transparency, it will become much harder for the next Qaddafi to siphon off funds generated by natural resource wealth into his own pockets.

Extractive companies have lobbied hard against the requirement to report the revenues that each project generates. They argue that it will be burdensome and expensive, and nobody will read the vast amount of paperwork produced. But the cost of transparency is miniscule compared to the real benefits to communities around the world. The European Commission estimates this will be 0.05% of gross revenues in the first year of compliance, and less in later years.

As for the claim that no-one will read these reports, try telling that to the citizens of Ghana or Equatorial Guinea, living in poverty in some of the world’s richest countries. Tell that to the villagers of Mparo, waiting to see if their diamond mine will become a blessing or another wasted opportunity.

EU ministers have finished their discussions of the extractive transparency proposals for now. While there was broad support for the principles that undelie the proposals, at least in public, there was a curious reluctance to apply that principle to themselves. Summing up, Danish Minister Ole Sohn said that ministers would now look at the possibility of exempting EU member states from the transparency provisions for oil, gas, mining and forestry companies. This would have the bizarre result that local communities in sub-saharan Africa would know exactly what their governments were receiving in revenues from natural resource projects, whereas citizens affected by fracking projects in Poland and Ireland, or gas extraction in Cyprus, or gold mines in Romania would need to issue a Freedom of Information request to determine exactly what their governments were receiving. Perhaps EU ministers believe that their own citizens are not entitled to the same level of corporate accountabilty as those beyond their borders? Or perhaps they believe the EU is free from corruption? In which case, the recent Eurobarometer survey on corruption in Europe, or the results for EU countries in the 2011 Corruptions Perceptions Index, should be recommended reading before they reconvene in Brussels in May.