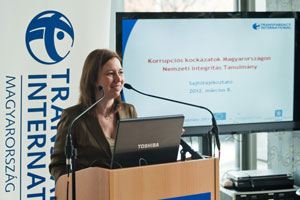 In the picture of Hungary painted by Transparency International Hungary’s report on the country’s institutions last week, the colours would be quite blunt, with opaque areas in grey representing shady figures and institutions bound together very closely. In less artistic terms, it seems that nowadays private interests prevail over public interests, and Hungarians have just started to wake up to that fact.

Our report emphasises alarming corruption risks arising from close relationship between the political and the business elite. At the same time, an apparent avalanche has been triggered in the Hungarian public debate. Everybody, including politicians, journalists, academics and mainstream bloggers talk about oligarchs and ‘octopuses’ playing the power game and taking serious economic advantage behind the scenes.

An MP referred to our report during a debate about the emerging corruption networks in the Hungarian Parliament. According to the Financial Times, we cast light on the “darker side of Hungary”, while the Wall Street Journal highlights how we exposed the country’s vulnerability to corruption.

96% of Hungarians say corruption is a major problem in their country.

But what is happening in Hungary? How did we get to the tipping point? Since the last report of this kind, issued in 2007, many significant changes have occurred in the political arena. After the 2010 elections, the centre-right government gained a two-third majority in Parliament. However, those changes did not foster the fight against corruption as integrity measures have not been improved notably.

Our report underlines that Hungary’s system of checks and balances has lost its stability; consequently, the integrity of most of the bodies examined has weakened. Even if legislation is adequate to provide independence, it is doubtful that control institutions such as the State Audit Office or the new organs of judicial administration can operate without political interference.

Furthermore, a lack of transparency in the legislative process signals that the Hungarian state has been captured by powerful interest groups. In short, that is why ‘octopuses’ find their way through the weakened integrity system quite easily.

We have been asked several times which corruption cases and persons should be blamed? Our report is the result of academic research assessing the performance of, and corruption risks in, 13 institutions and sectors, from politics and the judiciary to the media and business. It does not investigate individual cases or analyses actual networks of powerful alliances. That is the role of others. We complete our own mission when we highlight the worrying systematic tendencies we observed throughout the research process.

Nevertheless, the naming and shaming will not work until accountability and transparency is under pressure, networks are prospering without real willingness to eliminate them regardless which political side they belong to or support. All decision-makers as well as society has to recognise that a new pattern of corruption is on the rise. When the state and legislation is captured, a narrow-minded approach to fighting corruption offers only partial solutions.

Evidently, it is high time to wake up and face the whole shady picture of corruption in Hungary. The launch of our report and the following public debate was only the first step, there are still many more to take.

The essential measures correspond to our advocacy work and initiatives. Lawmaking has to become more transparent with lobby rules to be adopted, and the recent practice of initiating important legislative changes by individual MPs and parliamentary committees should be limited.

We would like to launch real and substantial discussion on party financing regulations in order to provide transparent and sufficient rules into one of the weakest pillars of the NIS system. Interventions and bureaucratic obligations burdening the business sector should be predictable and eliminated where necessary, while guarantees for a more accountable public procurement system should be introduced.

We also advocate for a more accountable judicial system through our recommendations to strengthen the courts’ ability to exclude political interference from their operation. Our report also found that the whistleblower system still does not work. The regulatory framework exists but without an institutional background it cannot fulﬁll its mandate. In general, codes of ethics, including rules on conflicts of interests, gifts, hospitality and post-employment restrictions should be established and implemented in almost all pillars of the NIS.

A couple of weeks ago, the Hungarian government initiated an anti-corruption programme targeting only the central administration. It might be able to bring some colours to the picture painted above, but without a comprehensive approach embracing all relevant problems and initiatives the overall blunt composition and frames will remain the same.