3 April 2012 in Americas, Measurement and Research, Politics and government

The days of passing money under the table and in dark corridors may be over for corrupt politicians as they get smarter and savvier about bilking the system. 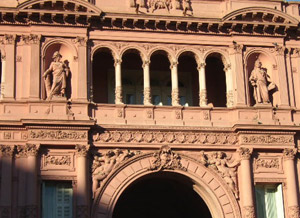 The use of low interest loans to politicians (think Germany) and public companies to make campaign contributions (think Serbia) are just two new ways that political corruption has ‘turned clean’. Another way has been the use of government advertising.

On paper, this is completely legal. In fact, it can be a good service and use of money, providing a way to get the word out on government campaigns against smoking or efforts to enroll all children in school. But dig a bit deeper and the motives can be less than noble, potentially providing a way for a party in power to tighten the reins and dole out political rewards.

A recent study released by Poder Ciudadano, the Argentine chapter of Transparency International, raises some of these questions. The report finds that spending by the national government represents a 9 per cent stake of the total advertising market in Argentina. The city of Buenos Aires, which is controlled by an opposition party, takes a 1 per cent slice.

To put this in perspective, Unilever and Procter & Gamble, the second and third largest players in the local advertising market, have an estimated 5 per cent and 4 per cent market share respectively – less than half what the national and city government are spending together.  In neighboring Brazil, the government’s market share does not top 3 per cent. Even in the UK, where the government is one of the main advertisers in the local media, it controls between 4.5 and 5 per cent of the market.

When the share of government spending is quite high, it can cause print and visual media outlets to curb their messaging and critiques of the government in order to keep the advertising monies coming – and their bottom lines stable. As has been seen in other countries, these high flows through the media can also serve as a way to provide kick-backs to parties or reward party supporters.

More troubling, spending can serve as a way to top up the official amount of electoral advertising allocated to each party during the campaign season. For example, the province of Buenos Aires spent the second most on advertisements to publicise a concert by a singer who later wrote the campaign song for the party. In the city of Buenos Aires, more than a tenth of public advertisements were taken out to promote a history programme that was later ruled by the courts to be politically biased and subsequently stopped.

Using public service campaigns for political ends has a high social cost that cannot be ignored. It means diverting monies from other areas to keep government advertisements funded. In the case of Argentina, such spending was nearly US$8 per person in Argentina and more than US$13 on each inhabitant of the city of Buenos Aires.

What can be done in any country to prevent potential abuses of state resources? The chapter in Argentina proposes some ideas:

Let’s hope that Argentina and other governments are listening.