The roadmap to a new beginning

17 May 2012 in Africa and Middle East, Defence and Security

Peace agreements offer the possibility for a new beginning. They allow the international community and national governments the opportunity to strengthen governance and embed some anti-corruption controls which, in turn, will help build durable state institutions. Recent studies demonstrate that change can be achieved with the appropriate mix of political pressure, incentives, and creativity. As we near the 2014 deadline by which the United States and its allies will significantly reduce its footprint in Afghanistan, discussions on how the state will transition into a stable, self-governed entity are gathering serious pace. This provides the international community with an opportune moment to reflect on how it addressed the conflict as well as its subsequent aftermath.

After the fall of the Taliban, the emphasis, justifiably, was on building a foundation for sustainable peace.  But public discourse was limited and failed to take into account the interests of many stakeholders. Fundamental long-term goals such as good governance, accountability and transparency were de-emphasised in favour of immediate and short-term stability.

Controlling corruption goes to the heart of these long-term goals.  One lesson we still haven’t managed to learn from previous conflicts is that corruption fuels conflict and conflict fuels corruption. When corruption is not properly addressed, an arduously negotiated peace can quickly unravel, backsliding the country into conflict and instability.

For this reason, peace settlements should as a matter of priority seek to control and minimise the risk of corruption becoming overwhelming. How the settlement is implemented is a key consideration. As various studies have shown, how one arrives at successful outcomes often proves as important as the agreement itself.

Transparency International’s Defence and Security Programme (TI-DSP) has developed a mapping of conflict corruption risks (see image) which helps to show how corruption feeds into conflict and perpetuates a vicious cycle that can be hard to break. It is the ‘settlement’ phase that can and should act as the driver for change. However, in amongst the desire for ‘peace-dividend’ and stakeholders jockeying to increase their influence, conflict negotiators may be tempted to prioritise stability over good governance and anti-corruption provisions. Our team believes this approach is lacking one key element: a specific anti-corruption strategy aimed at the Defence and Security establishments is necessary to prevent a return to conflict. The role of these establishments is vital as they are often one of the few viable state institutions which outlive the conflict. 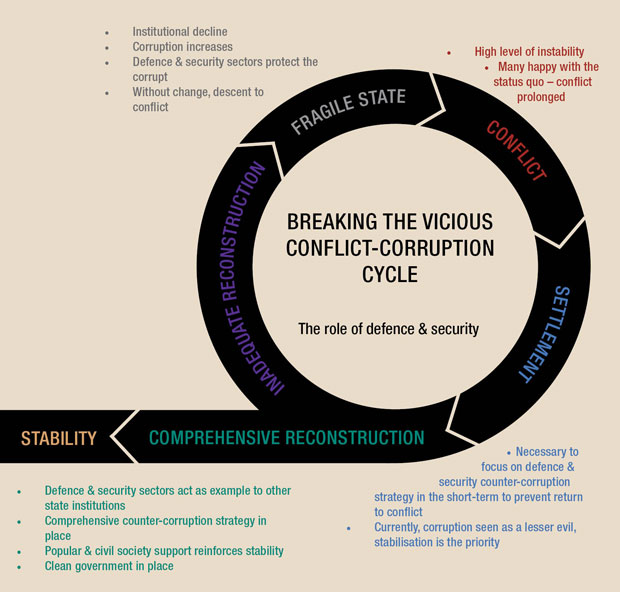 There may be good arguments for side-stepping corrupt institutions and corrupt personalities who are vital in underpinning a settlement. For instance, in the Former Yugoslavia, a blind eye – at least temporarily – was turned to certain corrupt practices in the interests of securing a broader settlement. However, this led to trouble later on in the form of more deeply embedded organised crime and state capture that are much harder to address later. On the other hand, experience in Liberia and Sierra Leone suggests that settlements designed at an early stage with state-building and ‘clean’ institutions as primary goals are more durable than those unduly influenced by short-term expediency. Agreements with detailed and explicit anti-corruption provisions negotiated into them stand a better chance of long-term success and sustainability.These points illustrate the need to factor counter-corruption considerations into the negotiating process and to be clear about its extent and how – as well as through whom – it operates. Not doing so may lead to a country being in a constant state of conflict.