Voting Day in Egypt: why I am optimistic — for now

25 May 2012 in Accountability, Africa and Middle East, People power

With the sun beating down and temperatures reaching 41 degrees in Cairo, I went to my local polling station to vote in an election where, for the first time in our history, no one knows the outcome. This was a remarkable moment for me and my fellow Egyptians.  And because of that, I have to say that there was an incredible, hopeful vibe.

This election, despite rumours of inaccurate voter lists and a lack of transparency in campaign spending, was going to be freer and fairer than any before. We were proud to be there, doing our civic duty in a country that will hopefully no longer be a dictatorship.

Because my job is to promote good governance and fight corruption, I was fully aware of all the possible pitfalls for the election. There was not enough transparency in the process and not enough independent monitoring on the day. Organisations that received permits to go inside the polling stations are not allowed to write reports (though many are) and as voter lists have not been published, meaning quite a few corpses are still expected to vote.

But nevertheless, all I can say, is the vibe was great. 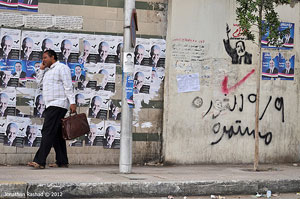 In the past six weeks Cairo has been plastered with headshots on every open wall from street level to the sky, with giant billboards looming over expressways, advertising the names and faces of some of the 13 candidates: a patchwork quilt of raucous free speech and unthinkable two years ago when everyone believed that Gamal Mubarak would inherit the presidency from his father.

I have to admit in such a crowded field it was a struggle to remember who was who. There’s been too little time and too little room for everyone to introduce their policy platforms to the voters, one of the biggest criticisms of the election process.

A day before elections, a group of five of my best friends sent a message around asking who each of us is voting for and we all picked a different candidate.  We have been friends for a very long time, have similar educational, social, and economic backgrounds and yet we are a perfect example of the scene in Egypt today: three were worried and confused, hoping they are making the right choice and two were convinced of their decision.

With such a crowded field and all the controversies over who could or could not be a candidate, it’s not surprising that some people were predicting a low turnout on Monday because people would not know who to vote for. When I filed into the side segregated for women at my polling station in the morning, it was relatively quiet, but others nearby were crowded.

To see such civic engagement has been a thrill. Everyone is talking politics. Everyone has a free, open opinion. And ordinary people are getting involved. One woman I had heard of found that a deceased relative was still on the list and she brought along the death certificate so the name could be struck off. Volunteer monitors are stopping candidates from putting posters too close to polling stations, which is against the law, and reporting any last minute canvassing outside.

Voters have an increased awareness of their rights, which is why I feel optimistic — at least in the long term. The short term is likely to prove more difficult.

Egypt faces tremendous challenges. The new president does not have a constitution in place defining his power; parliament can’t come up with a representative panel to write the constitution And next week, when we find out which candidates go through to the run-off election in June, the choice is likely to be between a former- Mubarak man, favoured by the military who has been accused of corruption and the candidate backed by the Muslim Brotherhood.

But then again, it might not. As I said, the vibe in Egypt — at least this week — is great.