Whistling around the world: The need for an international whistleblower movement

In Estonia, a palpable mistrust in the citizenry maintains a tenuous equilibrium that deters people from exposing wrongdoing.

In Lebanon, institutionalised corruption – and stories of revenge such as an informant who was dissolved in acid – keep whistleblowers silent within a culture of fear.

In Italy, people are raised to remain silent rather than speak negatively of others, lest they face the charge, Chi fa la spia non è figlio di Maria – “Who acts as a spy is not Mary’s son.” 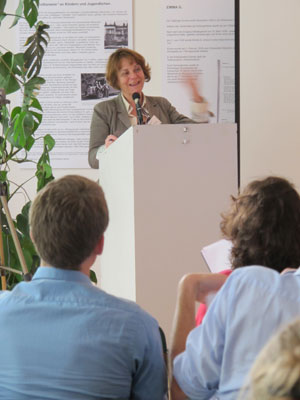 Dr. Marie R. Ghantous, president of the Lebanese Center for International Studies, delivers a keynote speech at the Expert Roundtable on International Best Practices for Whistleblower Legislation in Berlin, 24 May 2012.

A lack of whistleblower protection laws isn’t the only factor that prevents people from reporting corruption. Powerful cultural, political and social forces – often dating back centuries – can keep the lid on bribery, extortion, collusion and other crimes that by any measure should see the light of day.

At an international workshop held in Berlin 24-25 May, whistleblower advocates, legal experts and delegates from Transparency International Chapters from 13 countries discussed these barriers – and how each uniquely applies to their country – while also working to develop universal arguments to enhance protections and at the same time the image of whistleblowers.

Only a handful times before have so many world-class experts assembled to share and compare experiences, strategies and lessons on approaches to whistleblowing and protections for whistleblowers.

There was wide agreement that even as whistleblowers are becoming more important in citizen-level efforts to fight corruption, they still lack adequate legal protections in nearly every country in the world. Toward improving this situation, the participants worked to finalise fundamental principles that should be included in all whistleblower laws. The principles, to be released later this year, will serve to further the many advocacy initiatives already underway in all regions of the world.

The Berlin meetings provided a rare window into the lessons being drawn from these uphill efforts.

Globetrotting corruption fighter Auwal Ibrahim Musa, executive director of the Civil Society Legislative Advocacy Centre in Nigeria, spoke of frustrations caused by the rapid rotation of members of Parliament, which necessitates the maintenance of a broad NGO coalition and timely, diligent lobbying for a still unrealised whistleblower law.

International legal scholar Marie Ghantous, president of the Lebanese Center for International Studies, reflected on how an overly complex political system can create headaches when trying to get a whistleblower law passed – which has yet to be achieved despite years of lobbying.

In many countries, the leaders of national whistleblower organisations are fighting to keep strong whistleblower laws intact, amid challenges from well-funded interests and adverse court rulings that have chiseled away at these protections. Bea Edwards of the US’ Government Accountability Project and Cathy James of the UK’s Public Concern at Work spoke about their struggles to keep each of their country’s renowned whistleblower laws strong, while also advocating for their fair, consistent implementation. David Hutton of Canada’s Federal Accountability Initiative for Reform spoke about worrying delays in commencing a review of Canada’s federal whistleblowing legislation, which has produced virtually no results in five years and is considered deeply flawed.

John Devitt of TI Ireland is a one-man lobbying shop, pushing Parliament to pass what would be among the world’s strongest whistleblower laws. Delegates from TI Chapters in Belgium, Greece, Latvia and Lithuania are mounting advocacy campaigns, while Luxembourg’s Chapter is working to see that a new whistleblower law passed in 2011 will be comprehensively and sincerely put into practice.

Fittingly, the meetings were held the same week that one of Germany’s most prominent whistleblowers – Brigitte Heinisch – was awarded €90,000 by the Labour Court in Berlin. The ruling ended a seven-year struggle for justice that she commenced after her firing from a nursing home where she exposed filthy conditions for patients.

The Heinisch case, which became a cause célèbre within the closely knit community of whistleblower advocates and experts, punctuated the big takeaway from the whistleblower meetings in Berlin: that the time to build a progressive, forceful and innovative whistleblower movement at the international level is now.