May 29, 2012. The whole nation is watching the 2nd impeachment trial in Philippine history.

The usually busy streets of Manila are on standstill. Even taxi and jeepney drivers stop to personally witness the verdict.

All television and radio shows feature one event: the final judgment on the impeachment trial of Renato C. Corona, the 23rd Chief Justice of the Supreme Court of the Philippines.

The Senate gate is surrounded by anxious demonstrators, who for 44 days have proclaimed their own guilty verdict on the trial. Outside the Senate’s main entrance one can hear the resounding grouse of a lady who has been queuing since early morning to get the highly-coveted ticket to the courtroom, which can accommodate only around 200 spectators including the media.

I was lucky to get a ticket inside the Senate courtroom, which was packed in no time. You can feel the tension in the room as both pro and anti impeachment camps hope for victory. Just like the rest, I made my own tally sheet of all the Senator-Judges and their potential verdict. Twenty-three Senator-Judges will cast their votes. 16 votes are required for conviction and 8 votes for acquittal. Then there is the option to abstain. The ratio of the required votes was enough to make me apprehensive. Nothing was certain.

Even prior to the impeachment saga, I had always believed Corona did not have the moral ascendency to run the country’s highest judicial office. And after a Pandora’s box of wrong-doing was opened in the whole 44 days of court proceedings, compounded by his demeanor in court upon taking the witness stand (which struck me as arrogant), I totally lost whatever little respect I had in the Chief Justice. 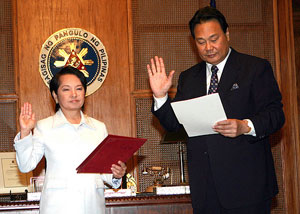 Former Philippine President Gloria Macapagal-Arroyo swears an oath of office as she appoints Renato C. Corona as the new Supreme Court of the Philippines Chief Justice in May 2010.

It was on December 12, 2011 when the House of Representatives surprised the country by impeaching then Chief Justice Corona with an overwhelming vote of 188 out of 285 parliamentarians signing in favor of the articles of impeachment. Corona has been identified as a very close associate of beleaguered former President Gloria Macapagal-Arroyo, having been appointed by Arroyo in the position. Arroyo herself is currently on hospital arrest for Electoral Sabotage and numerous corruption charges. Corona was perceived as the main protector of the Arroyos and a major deterrent in advancing cases against the latter. For months, President Benigno Aquino III unrelently lambasted Corona saying he “embodied what ails the judiciary”. From his seemingly orchestrated impeachment in Congress, Corona later on accused the President of using government resources and machinery to ensure his ousting.

During the trial, the prosecution panel from Congress did appear at times to present weak and incomplete evidence in arguing their case. The articles of Impeachment were reduced from eight to three for want of evidence, with the remaining grounds being violation of the Constitution and/or betrayal of public trust.

Then the debate eventually centered on the fact that Corona allegedly failed to declare in his “Statement of Assets, Liabilities and Net Worth”, his bank account deposits which is required by the Constitution of all public officials. Corona’s defense team argued that he was not obliged to declare his foreign deposits given the absolute confidentiality under the Foreign Currency Deposits Act (FCDA) of 1974. The debate ignited the public clamor for Corona to voluntarily disclose his bank statements which he ignored until the last 3 days before end of the trial.

The last week of the trial was the climax of what was like a reality show – full of drama and suspense. Corona, apparently against the advice of his defense team, opted to personally testify in Court and initially appeared to allow himself to be cross examined by the prosecutors.

For him, it was not just to defend himself before the Senator Judges but to air his side before the public, well aware that the whole nation was closely following the impeachment saga.

At the end of his 3-hour uninterrupted opening statement, he signed a waiver, allowing the disclosure of all his bank accounts with the condition that his accusers -particularly the 188 Congressmen who signed his impeachment -would also sign the very same waiver.

After finishing his statement and signing the waiver, he boldly stood up, shook hands with some allies and nonchalantly walked out of the courtroom. Everyone was baffled, including his own defense counsel.

Furious, the Presiding Officer immediately ordered the closure of all building exits and commanded the immediate return of Corona to the courtroom.

With a failed attempt to leave the building, his defense team explained that it was not a “walk-out” but that his blood sugar dropped and he started to feel unwell so he left the courtroom. Right. Surely, no one knows proper court decorum better than the highest magistrate himself. He did not appear so unwell as to have been unable to at least ask, and wait to be granted, permission by the Court to leave. After so much commotion, he later went back to the courtroom on a wheelchair.

If it was a strategy to avoid cross examination, the “walk-out” was not smart. Unfortunately for Corona, it was the only thing the public remembered. It certainly did not do well in reversing the public judgment on him.

Left with no choice but to reappear for cross examination, Corona was back in the Senate courtroom three days later. In an attempt to regain public favour after the “walk-out incident”, he again presented his signed waiver, this time, removing all attached conditions.

Pushed against the wall with an inquisition by one of the Senator-Judges, he ended up verbally disclosing his bank account figures. He admitted owning four US dollar bank accounts with a balance of around US$2.4 million, and a “co-mingled” peso account amounting to around PhP80 Million – neither declared.

Ironically for Corona, his own personal testimony became the primary basis for the verdict of most of the Senator-Judges. The Result : 20 votes for conviction, 3 votes for acquittal on  Article II: Respondent committed culpable violation of the Constitution and/or betrayed the public trust when he failed to disclose to the public his Statement of Assets, Liabilities, and Net worth as required under Sec. 17, Art. XI of the 1987 Constitution.

Forbidden from clapping and make noise inside the court, we could only exchange triumphant smiles to express our jubilation when Senate President Juan Ponce Enrile formally declared after  almost four hours of voting: “The Senate, sitting as an impeachment court, having tried Renato C. Corona,  Chief Justice of the Supreme Court, upon three articles of impeachment charged against him by the House of Representatives, with a guilty vote by 20 senators representing at least two-thirds of all the members of the Senate, has found him guilty of the charge under Article 2 of the said articles of impeachment”.

It took 44 days and PhP3.5 million to impeach the Chief Justice. So much resources have been poured in and I hope the effect certainly goes beyond just the removal of one man from office.

If it were any saving glory, Corona seems to have left a “laudable” legacy of being the first public official to sign a waiver disclosing his bank assets. Right now, the waiver seems to be in vogue with politicians left and right claiming willingness to sign the waiver. Well, not very surprising. After all, it is still extremely easy to hide assets under a different name. Sans cynicism, I hope that the interest in the waiver-signing will eventually lead to the enactment of the Freedom of Information (FOI) bill.

With the Arroyo-appointed Ombudsman and Chief Justice out of the way, there is no longer an impediment in President Aquino’s  anti-corruption and reform agenda. The real triumph will come in the next steps his Administration will take. No more excuses. The whole nation continues to watch.