Samuel Beckett’s exhortation to “fail better” could also be applied to the EU banking sector. Time and time again, troubled financial institutions have been bailed out by the taxpayer because they have been perceived as “too important to fail”. The ability of a large number of banks to benefit from excessive risk-taking without fully absorbing the downside of that risk exposes the moral hazard and potential for corruption at the heart of the financial system. TI has recently proposed ways of addressing this hazard.

The recent TI report on corruption risks in Europe rightly pointed out the links between runaway public finance deficits, integrity deficits and the economic and political crisis in the EU. It notes that European countries that perform worst in controlling corruption also run the highest budget deficits.

There is an apparent paradox here however. Some of the countries reeling most from the crisis were models of fiscal prudence in the years before Lehman Brothers’ collapse shook the world. Between 2000 and 2009, Germany breached the EU rules on public debt more times than either Spain or Ireland.

The fact that these two countries have been brought to their knees is a result of bad bets their banks made on the housing market, rather than profligate public expenditure. Faced with insolvent institutions, politicians and regulators have added their debts to government balance sheets already impaired by the global recession. In both cases, the results have been ruinous. Weighed down by the seemingly endless losses incurred by banks as a result of years of imprudent lending, they themselves have been forced to seek bailouts from their EU partners. In Ireland’s case, this has also meant swallowing the accompanying austerity measures.

To this day, we still do not know the full extent of the liabilities European taxpayers have incurred as a result of these bailouts. Attempts by the European Parliament to scrutinise these figures have been rebuffed by some EU member states.

That the fortunes of sovereign nations, citizens and banks should be entwined in this way should not blind us to some of the asymmetries. The same reckless lending practices that doomed banks and states were extremely profitable for staff, executives and shareholders in the good times. In short, while the profits were privatised, losses have been socialised. 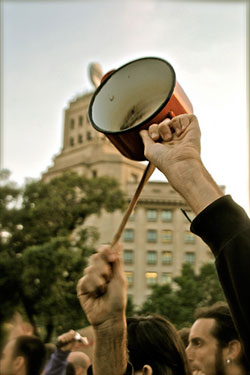 Spain has seen numerous protests with people banging saucepans and chanting slogans to demonstrate against austerity measures and the bailing out of banks such as Bankia.

So when banks fail, they frequently get bailed out from the public purse, most recently and dramatically in Spain and Portugal. The biggest banks also receive a hidden public subsidy by being able to borrow on the cheap: creditors lend money on favourable terms because of the perception that they are “too important to fail” and the taxpayer will come to the rescue when things go wrong. The extent of this subsidy for the five largest UK banks has been estimated at €57 Billion – an extraordinary distortion of competition in the sector.

As long as banks are considered so big or so interconnected that their failure would imperil a country or the entire financial system, there will be skewed incentives for bank executives and their creditors. It is a structural problem that requires a structural fix. Despite the painful consequences of the 2008 financial crisis, it is a problem that policy makers have barely begun to address.

That is why we at Transparency International were pleased to be able to respond to the European Commission’s consultation on structural reforms to the EU banking sector. The response, which you can read in full here, recommended a number of ways to reform the banking sector as a whole that would limit the exposure of taxpayers to poorly managed institutions.

The recommendations include better public disclosure and accountability of boards of course, but also more systemic reforms. Banks should be separated into those providing essential services to the economy – for example taking deposits and making payments, lending to businesses – and those providing other, more risky, services. Only the former would receive taxpayer support. 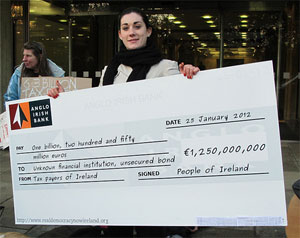 Carnival of Resistance, Dublin, Ireland. A three day festival of music, art and talks protesting 1.25 billion Euro being given by the Irish people to Anglo- Irish Bank and Irish Nationwide.

Banks should also be forced to issue a special type of debt that would mean their creditors would also take losses when the bank is in trouble. This would be an alternative to having their loans guaranteed in full by the state, as in the case of Anglo-Irish Bank. Creditors would charge a premium for such loans, naturally, but this would eliminate the subsidy the banks receive and reflect the true cost of the risks. The European Commission has recently proposed such a measure.

More radical still, if institutions are still considered too big to fail, then policy makers should consider shrinking them down to size by imposing a cap on the size of their balance sheets.

The ability of a large number of banks to benefit from excessive risk-taking without fully absorbing the downside of that risk exposes the moral hazard that lies at the heart of the financial system. This is not a case of “a few bad apples” but fundamentally realigning the incentives that drive the sector. If these recommendations receive the attention they deserve, future generations of taxpayers should have no more to fear from a failing bank than a failing bookmaker.