In wake of scandal, will South Korean politicians pledge a new start? 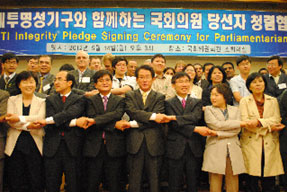 Parliamentarians, Korean youth and members of TI unite against corruption.

Corruption is high on the South Korean agenda right now. Last week police said they were investigating a large-scale corruption case involving 30 government bodies. Two weeks ago the brother of South Korea’s president, himself a senior politician, was charged with accepting $525,000 in bribes from two struggling savings banks. We, Transparency International South Korea, reacted by calling on the government to start a new debate on corruption.

This corruption scandal shows why we are pushing the country’s politicians to commit to integrity. Last May, 15 South Korean newly elected politicians came together to sign a 5-article integrity pledge.

The political atmosphere in South Korea today, and the challenges the anti-corruption movement there face, was neatly summed at this signing ceremony:

Mr. Lee Nam-Ju, the former Chairperson of Korea Independent Commission Against Corruption and the Adviser of Transparency International South Korea. 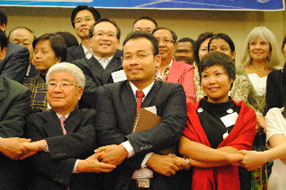 Transparency International South Korea instigated this pledge not just to give politicians a chance to demonstrate a commitment to putting corruption high on the agenda: but to make sure they do it on a platform which they can be monitored. It is easy for politicians to talk transparency, the challenge is to hold them to it.

Popular anger is running high over the latest corruption charges, and South Koreans already think that political parties and parliament are the most corrupt institutions in the country, according to a 2010 survey. In the same survey, only a quarter of South Koreans say government efforts to fight corruption are effective.

Transparency International South Korea hopes the May 14th Integrity Pledge ceremony at the South Korean parliament will reignite an old initiative to engage civil society in negotiations with the private and public sector on issues of integrity. These K-PACTs were instigated by Transparency International South Korea in 2005, but stopped in 2009 by the government. The President at the time was Lee Myung-bak, brother of the politician facing corruption charges, who went on to pardon 74 top executives of corruption in 2010.

Transparency International wants to revitalise the K-PACT and turn them into a full-blown anti-corruption strategy. This strategy is needed to ensure independent oversight of corruption in public life, and more convincingly demonstrate the independence of the country’s anti-corruption body from the administration it is supposed to monitor. 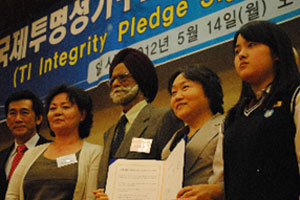 The current authority, the Anti-Corruption and Civil Rights Commission (ACRC),  replaced the previous Korea Independent Commission Against Corruption (KICAC) in 2008. This weakened the focus on corruption, moving from an authority focused on the issue completely to a body with three offices, only one of which tackled the issue.

Nevertheless, there are positive signs in South Korea. South Korea has been praised by a G20 report for its new whistle-blower protection law. The law has already led to cases against prominent companies such as KoRail.

The whistle-blower law should encourage people to fight corruption. The success of the Integrity Pledge depends on whether it can do the same.

The challenge for TI South Korea will monitoring and oversight of anti-corruption pledges. 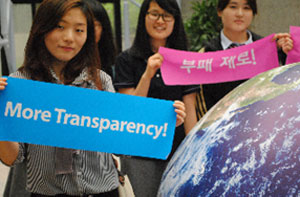 Members of the Korean Anti-Corruption Youth Network giving their message in parliament.

In other countries where Transparency International has overseen integrity pledges, involving people in monitoring the pledge has been the key.

At the May signing ceremony, Alan Kirupakaran from Transparency International’s chapter in Malaysia, shared the experience of a similar initiative, highlighting the value of citizen-led media. In Malaysia, widespread blogging led to the inspection of politicians’ Pledges during the recent turmoil in Malaysia, enabling the media to condemn current government efforts to suppress calls for greater accountability. 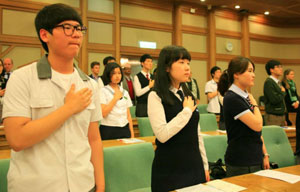 So the monitors will be the most important part of the Integrity Pledge. It is the many dedicated members of the Korean youth who have taken it upon themselves to scrutinize the actions of their representatives that can drive these pledges to fruitful outcomes.

It is appropriate then that the integrity pledge signing in Seoul was witnessed by representatives of the Korean Youth Network against Corruption. After all, who has a greater interest in cleaning up this generation of politics than the next one?