In the quest for Venezuela’s next leader

Presidential elections will take place in Venezuela on 7 October determining who will lead the country for the next six years. Hugo Chavez’ main challenger to the presidency is Henrique Capriles, the opposition’s candidate and governor of the State of Miranda. After three cancer operations in the past year, Chavez claims he is now fit to run the country. According to latest surveys, Chavez maintains a 15 percentage-point lead over Capriles, with 46.1 per cent of voters backing Chavez and 30.8 per cent Capriles. This leaves almost a quarter of Venezuelan citizens still undecided or unwilling to respond.

Just as the official election campaigns started last month, the Communications Ministry received an increase of more than 50 per cent of its originally approved budget. If this fact is not interesting enough by itself, these newly allocated funds are mainly distributed to entities of the national media whose purpose is the coverage and promotion of government activities. 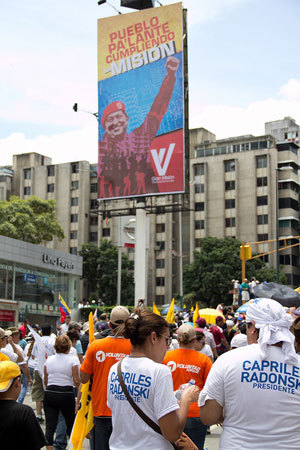 A walk in support of Henrique Capriles, the main challenger of current Venezuelan president Hugo Chavez (pictured on the poster).

This is the kind of information a group of concerned Venezuelan citizens has started to identify, put together and, in the run up to Election Day, publish in the bi-weekly bulletin, Alerta Electoral (Election Alert, in English). In this way, civil society organisations, journalists and academics want to raise awareness within the national and international community of potential irregularities and abuses of power.

These days, throughout Latin America (with very few exceptions) democratic elections take place regularly. This is a great achievement for a region that had several countries dominated by authoritarian regimes until a few decades ago. Now, most countries experience elections with high voter turnout and peaceful transitions of power between political parties. Electoral oversight bodies and international election observers also increasingly praise the electoral processes and find less and less irregularities. This is definitely an important triumph for democracy.

However, the picture in not completely rosy. As transparency and controls during the official election period and on Election Day itself improve, political parties search for new ways to outsmart the system and take advantage over their opponents, even if this means breaking the rules. Creativity to bend laws in the quest to access power is evident in many places: from setting up groups of friendly supporters to provide funds that are not clearly regulated by political party financing laws, to starting the campaign months before the official starting date, to abusing the machinery of the state in support of the official candidates.

The most recent example where elections results have been called into question due to irregularities is Mexico. A group of citizens is calling for investigations into an alleged vote buying scheme and a reported deal between the winning candidate, Enrique Peña Nieto, and the most influential media outlet in the country. A formal appeal process is now under way. However, the whole episode has polarised society and created doubts about the fairness of the elections. These doubts damage democracy.

In Venezuela, the group of concerned citizens behind Alerta Electoral, which also includes Transparencia Venezuela, Transparency International’s National Chapter in the country, is particularly worried about the potential abuse of state resources during the election campaign. This could create an imbalance in favour of the reelection of current President Chavez. For instance, while regulations state that each candidate is only allowed three minutes per day per television channel to illustrate their campaign proposals, the president in addition can use several minutes per hour to talk about government actions, plans and achievements.

By publishing this kind of information relevant to all Venezuelans, Alerta Electoral’s aim is to raise awareness for the importance of free, fair and competitive election. Through this blog we will follow its bi-weekly publication, highlighting some of the main findings in an effort to remind the public that democracy is not limited to the day of the elections. It needs to be exercised every day by millions of Latin Americans.