Why investors should care about transparency

On July 10, Transparency International issued a report showing that the world’s biggest companies are disclosing more about their measures for preventing corruption, but not so much of their financial data in the countries where they operate.

Investors should take note of these findings. Risks associated with corruption can have devastating damaging effects on a company’s reputation and its bottom line through fines, lost business or both.

Investors can and should play an important role in shaping company behaviour.  When institutions like SEDEX, FTSE4Good and the Dow Jones Sustainability Index start factoring corruption risks into their evaluations and investors like Calpers and CalSTRS start exerting pressure on the management of companies they invest in, those companies have an obligation to and interest in listening.

For example, CalSTRS took legal action as a shareholder of Wal-Mart against current and former Wal-Mart board members. The lawsuit alleges bribery and a subsequent cover-up in the corporation’s Mexico expansion.

CalSTRS is the US’s second largest public pension fund with assets totalling just over $146.8 billion as of May 31, 2012; they hold more than 5.3 million shares of Wal-Mart, valued at more than $313.5 million as of May 1, 2012. The suit asks that damages from the result of any violations be awarded to Wal-Mart, and that the company reform and improve its corporate governance and internal procedures.

New York City’s pension fund is the latest group of disgruntled Wal-Mart shareholders to file suit against the retail giant in relation to bribery in their Mexican operations. 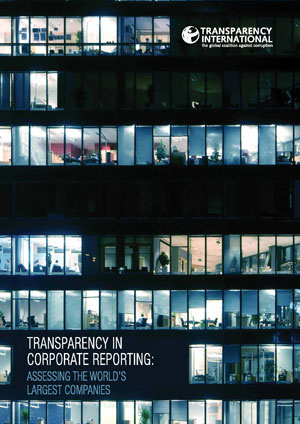 Like companies themselves, investors, are increasingly aware that corruption scandals can damage company brands, and therefore value.

Institutional investors are becoming more sensitive to the risks associated with corruption and the impact it can have on company value.  It is imperative that they take these risks into account when making investment decisions.

Wal-Mart’s fortunes after the allegations of bribery show the business cost of corruption. When the New York Times reported on allegation of bribery at Wal-Mart, the company’s share price dropped by about 5%, wiping roughly $10 billion off the value of the company.

Now our report shows that many of the world’s biggest companies are carrying substantial corruption risk.

This means that major parts of their operations are harder or impossible to track. As such, citizens in countries where they operate are unable to monitor their activity and hold them accountable. Would having this information have made it possible for Mexicans to detect wrongdoing by Wal-Mart? We can’t know for sure, but what is clear is that it is almost impossible without making this information publicly available.

What should investors do?

Investors should demand companies to be more transparent by reporting on anti-corruption programmes, organisational transparency and country-by country reporting.

This information should be factored into their investment decisions.

Meanwhile, rating agencies need to start thinking about corruption risks. They can do this by including company commitments to transparency measures as an integral part of their evaluation process.

Accounting standards relating to financial accounting as well as to corporate social responsibility reporting should also include corruption-relevant disclosures.