Jeremy Pope – A personal appreciation of his times at Transparency International

Jeremy Pope was the Sancho Panza to Peter Eigen’s Don Quixote. Together, they were widely seen in 1994 as tilting at windmills, full of enthusiasm for a cause that many viewed as utterly hopeless. The skeptics were wrong. Pope and Eigen made an enormous difference in raising public awareness across the world of the vicious dangers of the abuse of public office for private gain. And, they led the charge in building a global civil society movement that has had an impact far beyond what they could have even dreamed when they first started talking about building Transparency International (TI) in 1993. 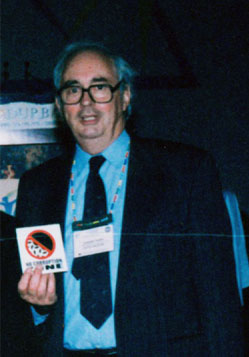 The death of Jeremy in New Zealand hits very hard for all his friends and far beyond. He devoted so much of his life to the cause of human rights and promoting justice for all. At the suggestion of Peter Eigen, the founder of TI, I met Jeremy in London in January 1993, where he served at the time as the chief lawyer at the Commonwealth Secretariat. Several weeks later we met again in The Hague when he attended the signing of TI’s articles of incorporation and in January 1994 he started in Berlin as TI’s first Managing Director.

He was the most creative and enthusiastic of activists, with an absolutely infectious zeal. At TI in those very early days he was like one of those musical buskers one encounters from time to time who amazingly can play the harmonica, the drums, the guitar and seemingly other instruments at one and the same time. Keeping up with him was impossible – he would simultaneously be writing an essay, arranging a workshop, directing research colleagues, challenging UK art school students to design the TI “Integrity Award.” He worked at amazing speed, knocking off press releases, statements, speeches, even books, from his keyboard with grand facility.

His writing shaped the style of TI’s argumentation and compellingly rallied all manner of people to join the big tent that Peter Eigen was determined to erect. Activists and journalists, judges and pompous politicians, all came under his influence. He organized workshops in national capitals that, for the first time, brought prominent people together for absolutely candid discussions of national corruption issues. He developed the TI Source Book, which was a remarkable effort to draw together a host of important themes about governance and corruption that could be adapted from one country to another – it was translated swiftly into many languages.

Jeremy was a pioneer of a great deal of TI’s research, a formidable advocate of the Corruption Perceptions Index and of other tools that have now become well known. His tireless efforts have had a rich legacy.  He will be hugely missed.