Bribery in Nigeria tackled globally, but not at home

Companies caught bribing in nigeria have paid billions in fines, but not in Nigeria. A nigerian NGO tries to find out why.

One of the reasons why there are so many foreign bribery cases going on related to Nigeria (see box below), is basically that corruption in Nigeria is deeply entrenched in almost every area of the public sector.

The anti-corruption movement in Nigeria is mainly driven and empowered by civil society organisations, who are helped by new Freedom of Information laws passed late last year, in 2011, which hopefully will enable and consolidate the fight against corruption. 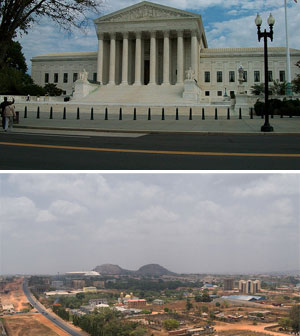 A dozen global companies have faced legal action from the US Department of Justice for bribery in Nigeria, but how many will face Justice in Abuja, Nigeria's capital?

Our NGO, the Socio-Economic Rights and Accountability Project (SERAP) made efforts to find out about foreign bribery fines through the awareness created by the OECD reports on bribery and various other works by anti-corruption movements.

Applying the OECD anti-bribery convention to the Nigerian situation has helped strengthen SERAP’s anti-corruption efforts by turning the focus to the supply side of the bribery transaction. This also, together with SERAP’s ongoing work has brought to light the issue of foreign bribery fines currently being pursued by SERAP.

SERAP made contact with firms and experts to find out how US anti-corruption (FCPA) laws were bringing companies to justice for bribes paid in our country, Nigeria, so that we could push SERAP’s anti-corruption work on foreign bribery fines in Nigeria forward. We also asked the US government to share the information they used in their cases.

Another major step SERAP took was to find out more on bribery and its effects. We see a lot of action taken by foreign governments on companies bribing in Nigeria, but none by our own government.

Working with anti-corruption colleagues worldwide allowed us to push our government to prosecute foreign multinationals involved in the act of bribery from both sides: the foreign company who offers the bribe, and the official who takes it.

Nigeria has seen a large number of cases and investigations in multiple jurisdictions involving foreign bribery allegations, from oil and gas extraction and phone contracts to gifts of cars to officials. The resulting settlements have involved more than US$ 1.7 billion in fines. See the back of last year’s report on anti-bribery enforcement for more.

Invariably, this has ruled out Nigeria’s right to prosecute the affected multinational companies. Some of the other multi-national companies have been prosecuted and the cases are pending in court. The next step for SERAP will be to challenge the legality of the non-prosecution agreement vis-à-vis our laws against corruption and to seek a judicial review of this decision.

There is still a clear lack of accountability and transparency and a commitment to these principles in government. Anti-corruption organisations in Nigeria, such as SERAP are making a difference by calling on government officials at the highest level to be accountable and transparent in their public duties.

The role that reports such as OECD reports play is to strengthen the work of the growing anti-corruption movement and build a network of ideas and anti-corruption strategies.

The work on foreign bribery fines is still a new area; SERAP is hoping to break new ground and to take the anti-corruption movement in Nigeria forward.