On September 18 Georgian opposition television stations warned their evening audiences that they were about to broadcast disturbing images of abuse by wardens at Gldani prison Nr. 8 in Tbilisi, Georgia’s capital city. Many viewers were nevertheless unprepared for what they saw next.

One video contained graphic images of prison inmates being sodomized by guards with brooms and police batons. Another showed a large group of uniformed guards brutally kicking and beating a prisoner to the floor, while other inmates waited, heads bowed, in line. The footage was recorded by a former prison guard who blew the whistle and is currently seeking political asylum in Belgium. 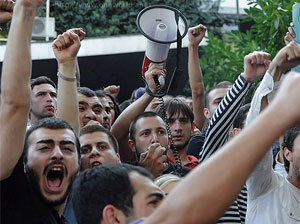 Thousands of Georgians, many of them students, took to the streets in protest during the days that followed. Distraught family members of inmates rushed to the jail. One mother, who had identified her son in one the videos, claimed he had told her, “Don’t tell anyone, or they will kill me.”

A few days ago, journalists and NGOs were allowed into Gldani Prison. Eka Gigauri, Director of Transparency International Georgia, spoke with inmates, who confirmed that the abuse was widespread.

Visibly scared the inmates told Gigauri and journalists that the officers who had perpetrated the abuse were still employed at the prison. They worried what would happen to them when the media coverage ended. Others claimed the abuse had been directed from a much higher level and accused a Former Interior Minister Bacho Akhalaia of ordering officers to rape inmates’ wives if they visit the jail.

The protestors’ reaction has been felt at the very core of society. Many of the people watching will probably have a friend or family member in jail. After the 2003 Rose Revolution, President Mikheil Saakashvili’s ruling United National Movement party implemented a zero tolerance approach even for petty crimes. While this has brought down crimes rates and petty corruption, the number of inmates has quadrupled.

Today, Georgia has the sixth highest prison population in the world, and the highest in Europe. Current occupancy is dangerously beyond capacity, 31.5 per cent of deaths amongst inmates are attributed to tuberculosis.  Critics have long alleged that abuse of prisoners was promoted actively by Akhalaia during his administration of the penitentiary system from 2005 to 2008.

Simultaneously, the government has controversially and doggedly pursued plea-bargaining. Since 2007 Georgia has had an acquittal rate of less than 0.1 per cent. 99.9 per cent of defendants are found guilty, an unrealistically high number for a system that lacks an independent judiciary, a fair and balanced prosecutor and adequate funding for defendants to mount a legal challenge to a charge. TI Georgia has highlighted the problem of defendants, who maintain their innocence yet are unable to afford a legal defence, and are coerced by the prosecution into accepting a reduced prison sentence.

The allegations are not new but the videos are substantial proof of widespread abuse dating back over recent years. The National Security Council Chairperson Giga Bokeria and President Saakashvili conceded that the government had not paid attention to the numerous warnings given by the Human Rights Ombudsman who delivered his latest annual report in March 2012. The report details cases of abuse and torture and states that 30 per cent of the forensic tests conducted on inmates who had died in jail evidenced physical injury or abuse. His report was ignored by Parliament, 80 per cent of the chamber is controlled by the ruling party. This raises serious questions about the efficacy of government oversight in Georgia – a problem highlighted in a 2011 TI Georgia assessment of the country’s system of democratic checks and balances.

Watch Georgian journalist Shalva Ramishvili who first showed the abusive videos on his show visit the prison of Gldani (in Georgian):

Georgia is only days away from the most important parliamentary election since the Rose Revolution, scheduled for October 1. It is the first time in a decade that the opposition have united in a coalition, the Georgian Dream, led by billionaire Bidzina Ivanishvili, in a bid to challenge the power of the ruling party. The government, keen to be seen to be reacting to public anger, has sacked a number of senior prison staff. The Minister of Corrections and Legal Assistance, Khatuna Kalmakhelidze and the Interior Minister, Bacho Akhalaia, have resigned, after demands by protesters, TI Georgia and at least a dozen other NGOs, for the removal andinvestigation of these and all implicated officials.

While not denying the authenticity of the videos or systemic failure, President Saakashvili will only admit that the abuse dates back months, not years. According to his and the ruling party’s official statement, this is a plot designed by his political opponent Ivanishvili, who bribed the perpetrators to commit and film the abuse. Popular scepticism has met the President’s assertion that the prison system, in the course of three days, has been completely overhauled. Today, instead of arresting the perpetrators of this abuse, the government arrested 3 opposition activists.

These events have received a great deal of international media coverage. The government of President Sakashvili is under the spotlight of world opinion, which is watching closely to see whether it can deliver an effective response. TI Georgia, in coalition with other NGOs, reiterate the protestors’ demands and call upon them to take proportional measures in response to these events by: