30 people, some of them friends, some others strangers, put together their skills in one place for one cause: beating corruption while having fun programming, coding, testing and, when things did not work out, starting all over again. The goal was making one good idea  become reality by the end of 24 hours.

In Bogotá, Colombia, hackers and developers were full of energy when they arrived at Academia Wayra at 5PM where the ‘Hacks Against Corruption’ hackathon took place the Saturday before last .

Their commitment was really amazing! They literally did not stop working for 24 hours. 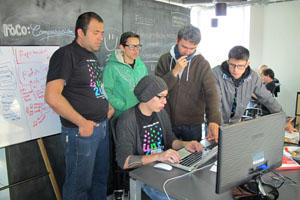 Hackers and activists at work in Bogota

The winners developed a web and mobile citizen tool to report electoral advertising for 2014 elections. It is called Participa.co and it is working to 95%. The developers expect to use the awards for fully finishing the software. Hopefully, our mobile phones will become tools for citizens to watch over infractions and felonies to electoral law.

But we at Transparencia por Colombia were not the only ones that got new tools last weekend. Zoila Noriega, from Acción Ciudadana Guatemala, and Carlos Arroyo, from Proética Peru, also came back home with something in their pockets.

Carlos’ chapter now has a structured project for a software that allows citizens to track budget assignations for public works from a variety of public information sources provided by Peruvian government. The prototype is scheduled to be developed in December, during RHoK’s global hackathon.

Zoila’s Transparency chapter in Guatemala, meanwhile now has a prototype of an online platform for tracking citizen corruption allegations on their way through Guatemalan public offices. The site is 85% ready, and a group of developers is committed to fully finish the software and give it to the Guatemalan Advocacy and Legal Advice Centre.

Of course we were all very tired on Sunday night, but there was a smile of satisfaction on everybody’s faces. Thanks to the global HAC team for this amazing learning experience!

Hackathon reports from other cities will follow later this week.