30 October 2012 in Europe and Central Asia, Politics and government

Tomorrow, Italy’s Chamber of Deputies will finally vote on a new anti-corruption law, following a debate tonight. The bill was already approved by the Senate on 18 October369.

While no panacea for a country tarnished by corruption, the law is welcome at a time when corruption scandals dominate politics in Italy370 from Lombardy371 to Sicily372 prompting resignations and new elections.

Former president Silvio Berlusconi has been sentenced to four years in prison for tax fraud, but as my colleague Valentina wrote373 last week, the case is likely to fizzle out next year when the statute of limitations expires.

A speech by Prime Minister Mario Monti during the debate on the anti-corruption bill reflects what we have been saying: corruption not only costs an estimated $78 billion (€60 billion) in wasted public resources annually, but also has a negative impact on the foreign investments, citizens’ trust and ruins Italy374’s international credibility.

When corruption flourishes, the whole community suffers, while only a handful benefit

In our latest report on the state of fighting corruption in Italy published this March375 Transparency International Italy376 warned that a series of reforms377, including stronger anti-corruption laws378, are needed to make public bodies more resistant to corruption.

The new bill has some, if not all, of the elements required to overcome the rampant cronyism and influence peddling in Italian politics. 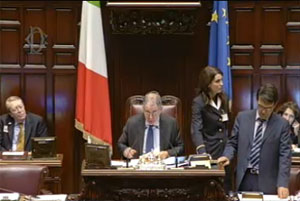 An anti-corruption body for Italy

The most important recommendation we made that the new law will introduce is the establishment of a national anti-corruption authority. This body will be stronger than the already established CIVIT but with further powers of investigation.

Under new provisions for greater transparency in the bill all public institutions will be obliged to appoint an anti-corruption manager responsible for producing annual anti-corruption plans, and for addressing any corruption-related loss of revenue in the public administration.

Public bodies will also have to publish more sensitive data, such as the budget and the salary of senior officials. They will all have to adopt code of conducts and provide anti-corruption training for their staff.

The law will also make it easier for bribery to be prosecuted.

The law defines two separate acts of bribery and makes the punishment for them more severe. The maximum conviction for extortion is now 12 years. Incitement to bribery will carry a sentence of up to eight years for the bribe-taker and up to three years for the bribe-giver.

This would meet the recommendations made to Italy by international bodies like the Council of Europe380 and the OECD.

The law also will help stop cronyism and bribery for business contracts by broadening the definition of private sector corruption. From now on, the acquisition of goods and services must comply with competition law. Until now, Italian law only defined “corruption” as something involving the public sector (our research381 shows that bribery is just as likely between companies and officials).

Influence peddling has been an accepted part of Italian politics for decades. Now there will be a specific rule against it that will change the way lobbying is done in the future, hopefully limiting cronyism.

The crime of “illicit traffic of influence” was the most problematic issue during the discussion on this bill in the Senate, but it has been included in the bill.

People who secure benefit for a third party, for example, by using personal relationships within the public administration, will face prosecution.

For the first time, Italy will have legislation protecting public sector employees who blow the whistle on corruption. Italy was one of 19 European countries lacking whistleblower protection in a report384 we published earlier this year. Though still not as strong as we would like, getting some measure of whistleblower protection enshrined in law is a step in the right direction.

Italy badly needs a strong legal framework to fight corruption. This law is a good start.

We hope, however, it is further strengthened. One provision in the bill we hope will become law by the next elections in spring 2012 is a low to stop people who have been convicted of crimes punishable by a two-year sentence or more from running for office.

What we hope most of all is that the spirit of the law, as well as its provisions, will be accepted by politicians and citizens alike.

As we always say, a new bill alone cannot defeat corruption on its own. Its spirit of greater transparency and integrity must be endorsed and shared by everybody, especially citizens.

We can have a strong legal framework, but if these values are not shared, the new law will only be considered as a law to be broken.

There needs to be a belief in Italy that corruption is not business as usual and that the old way of doing things will change. Enforcing the law will be an even bigger step in that direction, and as a civil society organisation we will call for a more participative and active attitude of citizens regarding corruption and unethical behaviour.