Rio shows way on links between environment and corruption

The inter-governmental deal on climate change inked in Rio de Janeiro in June has proved nothing less than the “longest suicide note in history”, according to Kumi Naidoo, Greenpeace International’s executive director. He sees the successor compact to the original landmark 1992 Rio declaration on climate change as a crucial and perhaps fatal missed opportunity to tackle a problem that links the worlds of environmentalism, economics and graft. 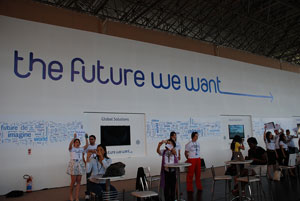 A group of young people raise their voices at the Rio+20 conference this year.

“On many of the critical [areas] we have actually gone back,” Mr Naidoo said, lamenting the “corruption and the absence of transparent governance” that continue to enable the over-exploitation of fossil fuels. “When we look at the reality, time is running out.”

Twenty years after the original Rio agreement, the links between the degradation of the planet and the problem of international corruption have become increasingly clear. From illegal pollution in poorly regulated countries to illicit carbon trading dealings in western financial markets, the growing international focus on the environment has revealed many disturbing examples of poor governance and even outright fraud.

One striking point to emerge from Rio is the way debate over the environment has widened from longstanding arguments over the morality of legal limits on carbon emissions, which some emerging economies see as a tool used by the industrialised world to limit their growth. Now many activists – while acknowledging this political divide as important – are also keen to emphasise how official inertia over environmental protection is also symptomatic of wider problems of governance, in rich and poor countries alike.

Achim Steiner, executive director of the United Nations Environment Programme, pointed to the notorious 2006 case in which a subcontractor of the European oil company Trafigura dumped toxic waste in the Ivory Coast commercial capital of Abidjan. The affair – in which Trafigura eventually paid £30m to alleged victims of the pollution, while continuing to deny liability – raised a host of questions about the regard multinationals pay to the environment in poor states with little capacity or will to enforce high standards.

“How does a country that doesn’t have the laboratories or the technical expertise or the laws scrutinise the waste in a way that allows it to protect its citizens?” Mr Steiner asked.

Over in the industrialised world, the Rio-driven booming trade in carbon credits – permits to emit a certain quantity of greenhouse gases – has emerged as a growing concern for western law enforcement agencies.  More than 100 companies were reported to Britain’s Financial Services Authority regulator in the year to June over alleged fraud related to carbon credit dealing, which the agency said had been embraced by career criminals who spend their lives moving “from con to con”.

Other links between environmental degradation and ethically questionable or corrupt practices have been exposed increasingly starkly by technological advances. Manish Bapna, acting president of the World Resources Institute, said an initiative his organisation started 15 years ago to monitor deforestation and put images of it on the web had grown much more powerful, thanks to improvements in internet connectivity and access to satellite imagery. Now pictures once not updated for years are refreshed every 16 days, to a detail of 250m by 250m.

“We will now be able to detect illegal logging the size of a football field,” he said. “Make that available on social media around the world and it revolutionises the way we look at transparency.”

One important lesson of the two decades between the Rio climate deals is that environmental campaigners need to pay more attention to anti-graft activism and vice versa. Greenpeace’s Mr Naidoo argues the definition of what constitutes corruption needs to be made broader still, to convince the public that problems ranging from climate change to fraud are not discrete and remote – but linked both to each other and to quality of people’s everyday lives.

“If we do that, large numbers of ordinary people will join with us,” Mr Naidoo said. “At the moment they don’t join with us, because they don’t think we are tackling the fundamental injustices in our economy and in our democracy and in our society generally.”

Michael Peel is a Financial Times journalist. He writes here in a personal capacity.