In September 2011, in the slum of Mumbai, the heavy monsoon rains were filling up sewage pipes to breakage point. The dirty waste from the burst pipes flooded the streets at an accelerated pace because of the continuous and strong rain pour. The residents of the slum had no choice but to walk those filthy streets which represented a serious health hazard and increased the spread of diseases. Demands had repeatedly been made by the residents for the pipes to be fixed and properly maintained but no action was taken.

In the district of Khunti, Jharkhand, toilets were planned to be constructed under the government’s Total Sanitation Scheme. Whilst the statistics and official reports show that the work was done and that the money was spent, the reality is that the toilets in Khunti were never finished and instead the residents continue to rely on open defecation, a major problem in India, which causes diseases to spread rapidly, in particular during rainy seasons.

When the situation of poor access to water didn’t improve, the residents of Aundhewadi, Maharashtra, decided to take action. They decided to stop waiting and instead look for their own solution by building their own water pipe.

It’s not easy for the poor and disadvantaged, in particular in developing countries, to express problems that affect the quality of their lives. But there are organisations that actively seek the voice of the people to look for the right solutions. Video Volunteers, based in Goa, India, is one of them. Since 2003, they have been training community members, mostly from poor communities, to use video tools to document daily problems of life in India. Ranging from water, food and health issues, to gender disparities and the topic on untouchability, the organisation has been extremely successful in just bringing issues that have not been adequately addressed previously.

The above cases were filmed by correspondents trained by Video Volunteers, including the two in partnership with WIN (Mumbai and Aundhewadi). In Mumbai (video below), it was enough for the officials to hear about slums dwellers speaking on camera about their problems for the pipes to be quickly fixed.

In Khunti, the video (below) helped make officials accountable for the spending of the funding as the correspondent was promised by an officer that a survey would be made to assess the reality of the situation.

And the villagers of Aundhewadi (below), by having their initiative filmed and shared, have inspired other neighbouring villages to take similar action.

It’s of course hard to tell if the problem would have been sorted without the videos and not all problems can be solved by being filmed, but the videos not only serve to document the issues, they also empower people to be part of the solution. Video Volunteers has over 700 videos on their youtube channel and their correspondents post several new ones every week.

The Water Integrity Network (WIN) started working with the organisation in 2011 by collaborating on two videos on corruption in water and by jointly presenting in two major events, the WSSCC Global Forum on Hygiene and Sanitation (October 2011, India) and the 15th International Anti-Corruption Conference (November 2012, Brazil) with the aim to highlight the role of participatory video for improved water integrity. 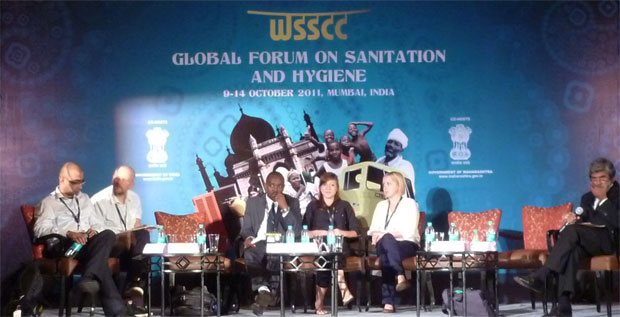