Young activists: the future of social media in the Arab world

The onset of the Arab uprisings demonstrated the power of social media and its effect of people protesting for their rights. Youth were an integral part of the revolutions, with many grassroots initiatives springing up online in response to years of endemic corruption.

In the search for more ways to use technology to fight corruption, last month we organised a conference for social media activists and bloggers in Mohammedia, Morocco.

The goal behind this unique gathering of youth from the Arab region was to spread a culture of transparency via social media.

From the first day people were thinking regionally to connect their ideas: such as a website to report the how policemen receive bribes from motorists when stuck in traffic which has become a commonly experienced problem in large Arab cities.

Workshop facilitators were invited from the region with expertise and sizeable social media followings. These included Mohamed Beshir from Egypt who talked about his experience working with youth to present compelling messages about social issues such as corruption that affect their lives.

Rytis Juozapavicius, former director of our Lithuanian chapter, provided examples of projects undertaken such as a map measuring corruption based on surveys and interviews with Lithuanian citizens about public officials and how easily they can be bribed.

The different skills of the bloggers complimented each other, some were journalists, others were graphic designers and others were activists working with non governmental organizations, in devising strategies and campaign ideas in order to identify pressing issues facing their localities. 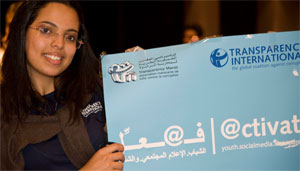 With the overwhelming positive feedback from the participants, we have to build on such developments. @ctivate was an exploratory event that showed us in Transparency International and Transparency Maroc the power and dynamism of youth at work.

The network that formed post @ctivate still remains strong. However we must maintain an outlet for these activists in their respective countries. We recommend that training these leaders through technology focussed workshops would provide a base for interaction with the wider technological community and those interested in anticorruption issues.

Photos were taken by our participant Adham Bakry