The UN asks what we think – but will they listen? 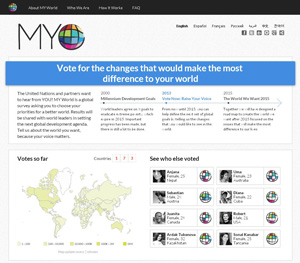 Flashback to 2000. The United Nations and its member states gathered in New York to embark on a new century that was free from poverty and flush with prosperity. They set out a long list of commitments that they thought would end poverty within 15 years.  Their pledges helped to re-energise efforts to fight poverty that this far had failed to deliver.

Their commitments were turned into  eight global goals for all countries to meet by 2015 – and which are known as the Millennium Development Goals (MDGs), each of which has different targets to meet. Among the targets was one to make sure that by 2015, all children everywhere would complete primary school.  As we have seen at Transparency International, corruption in education limits the quality and access to schools – and blocks turning this promise into a reality,

While some like maternal mortality are way off course, many of the goals are expected to be met at the global level – at least according to the UN. However, different regions, countries and groups are far from seeing these achievements in their everyday lives. There are still huge disparities and gaps among and between them, which get forgotten when you crunch all the data together.

Yet already there is a big buzz in global policy circles about what will come after 2015 when the current commitments end. What issues will make it on the agenda?

The UN has launched a site called “My World” to try to settle some of these questions.

The site has that simple, home-made feel that all the tech companies are pushing for their sites.

It asks us, the user and global citizen, what are our six priorities for making the world a better place. It includes having an “honest and responsive government” and “better healthcare”. The site allows you to add your own priority. With a few clicks you are finished and can go about your other work for the day.

It is a big shift from what happened in 2000 when world leaders and experts gathered behind closed doors to decide what they would pick and choose to work on.

But where will these votes actually go? Will the UN, governments and other decision-makers listen to what we are telling them?

No one seems to know yet. The consultation is one of many processes – from expert meetings and reports to country “town hall” meetings – that will be used by the UN to make sense of what needs to be on the agenda after 2015. We are hoping that governance and corruption make it on as a priority.

But will someone be listening?