Cyprus: a chance to strengthen its fight against money laundering

The issue of whether or not to bail out the troubled banking sector in Cyprus has taken on serious political overtones as the crisis deepens. During the past few weeks Cyprus has been accused of failing to combat money laundering and fraud and that Russian oligarchs seek refuge for their money in this “tax haven” country.

Cyprus is clearly not the first country to face such criticism and I am not in a position to evaluate the claims and counter claims as to whether Russians attempt to find loopholes in Cyprus’ framework with the aim of exploiting it. What I can say is that discussions like these should force the authorities to take a long hard look at the regulations in place and ensure that they are fully enforced.

Cyprus complies with most of the international tax treaties and guidelines which was the basis for which OECD placed Cyprus on the White List. Also based on recent Financial Task Force (FATF) findings, Cyprus ticks many of the most critical anti-money laundering boxes. More specifically, FATF reported that Cyprus has a tough regime for identification of beneficial ownership, with the obligation to identify ownership kicking in at 10 per cent, instead of the 25 per cent threshold mandated in the 3rd EU Anti-Money-Laundering Directive. On the basis of the number of areas in full compliance with EU money laundering directives, Cyprus ranks 7th out of 17, whereas Germany ranks close to the bottom, at 14th, just two places ahead of Greece. 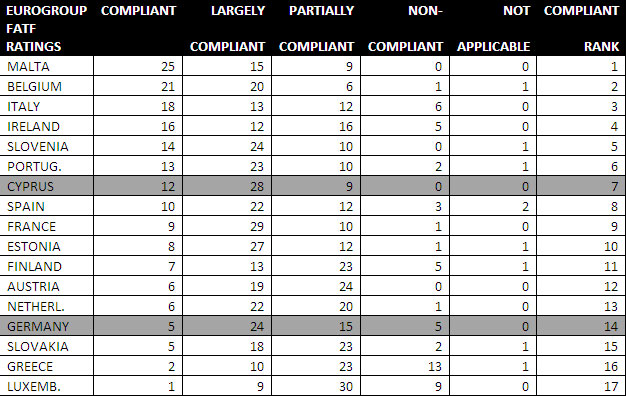 The key issues I would like to highlight relate to the effective enforcement of this framework and the transparency measures that should apply. Now is a particularly good time to ask for an even stronger commitment to fight financial crime as Cyprus negotiates for a hefty chunk of bail-out funds to shore up its ailing banking system and inherent public deficit.

Transparency International (Cyprus) has put forward a series of recommendations we believe would improve the country’s ability to fight financial crime: