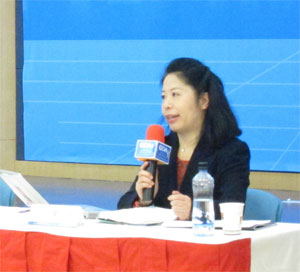 Hello, my name is Aki Wakabayashi from Japan.  I am a journalist, whistleblower and Executive Director of TI Japan.

Let me tell you the story about how I blew a whistle on the waste of tax money by public servants in Japan.

Before turning to journalism, I spent 10 years working for a government-supported labor think tank called the Japan Institute of Labour.  There I saw research staff spending their days chatting and reading magazines while drawing high salaries.  They barely conducted any research.  They sometimes played tennis during working hours.

How about senior managers?  They take lavish foreign “research” trips with favored female subordinates.  The President visited 80 countries around the world with first-class air travel and stayed in a suite in five-star hotels over seven years.

I left my job in the institute to expose the fraud and waste in the system in 2001.  I wrote a story for major magazines and provided documents and pictures.  It attracted public attention.  Newspapers and TV interviewed me. The Japanese public got angry.

The institute lowered my retirement wage.  So I filed a lawsuit and won at the Supreme Court case in 2005.

In 2004 a whistleblower protection law was established.  But it only protects the government and companies, rather than whistleblowers.  For example, if an employee wants to blow the whistle on crime, they must tell it to his superior first.  This then prevents most whistleblowers from taking action because the superior has power over the employees.

Yet, the number of whistleblowers is increasing in Japan.

Last October a young executive of the national defense army blew the whistle on the management according to the whistleblower protection law. The army ordered him to stop working for 6 days.  So he filed a lawsuit against the army.

And others put information on the Internet anonymously.

We must improve management so it sanctions misconduct, not whistleblowing.