This Sunday the Swiss voted in favor of a constitutional initiative entitled “Initiative against abusive remunerations”. This follows the proposal of similar measure in the European Parliament, which we blogged about on Friday.

The initiative, which applies to all quoted companies, squarely prohibits welcome packages and golden parachutes as well as bonuses in relation with the acquisition or sale of a business.

A constitutional initiative is a rather unique instrument permitting any citizen to propose an amendment to the Swiss constitution if they can, over a period of 18 months, convince 100 000 citizens to endorse the proposal.

Astonishingly, this particular initiative originated from the conservative head of a small family business producing natural cosmetics. The Swiss business establishment was rather against it. Only the Socialist party supported it, albeit for different reasons than Thomas Minder, the proponent. 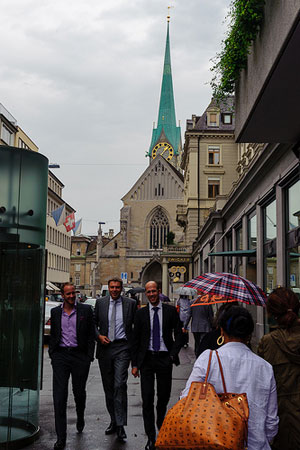 Businessmen in the street in Zurich

Over the last decade, the Swiss, who respect the rich only as long as they do not show their wealth, have had plenty of occasions to be shocked. The heads of Swiss multinationals are indeed some of the best paid and hardly hide it.

More recently, in the midst of the campaign on the initiative, Daniel Vasella was granted a so-called indemnity of 72 million CHF over 6 years for agreeing to a  non-compete clause upon retiring from Novartis. This time, the outcry was so loud that Vasella had to backtrack (who would not want to be in the position to renounce a 72 million gift?). However, this was not sufficient to erase the fact that the Board of Directors had agreed to such an outrageous golden parachute to do nothing. It largely contributed to the initiative being accepted by an overwhelming majority of more than two thirds of voters.

How the cap would work

The measure voted today provides that the global amount of remunerations of Directors and Management must not exceed an amount set annually by the shareholders. The Directors and the members of the Remuneration Committee are to be elected or reelected for one-year terms. Pension funds must vote their shares in the interest of their shareholders and must disclose how they have voted. Shareholders may vote electronically and may not give a proxy to the Board or to a depositary of shares. The amounts of pensions, credits and loans granted to Board and Management as well as bonus and participation plans must be governed by the Articles of Association.

A violation of any of these rules is to be sanctioned by up to three years imprisonment and a penalty of up to the amount of three annual remunerations.

The above principles are now enshrined in the Swiss constitution. They are not directly applicable but will need to be elaborated in a law. Attempts will undoubtedly be made to water them down but the strong majority supporting the initiative will ensure that it is essentially implemented.

The wide support of the initiative has been based essentially on emotions, on a feeling that enough is enough. Behind it looms the question of the legitimacy of excessive remuneration.

Is there not a flaw in a system which permits remunerations far above what a person or a family can decently spend?

Are executives not too one-sidedly rewarded for their financial results rather than for the quality of their performance?

Could this not have contributed to the current crisis? The Swiss initiative has only scratched the surface of these issues which need still to be addressed on a wider scale.

The reactions all over Europe today show that the Swiss are not alone with this feeling and that the initiative may have an impact that goes far beyond Switzerland.

What do you think?

Does excessive remuneration encourage excessive risk-taking and other behaviour lacking in integrity? Is capping bank bonuses part of the solution?